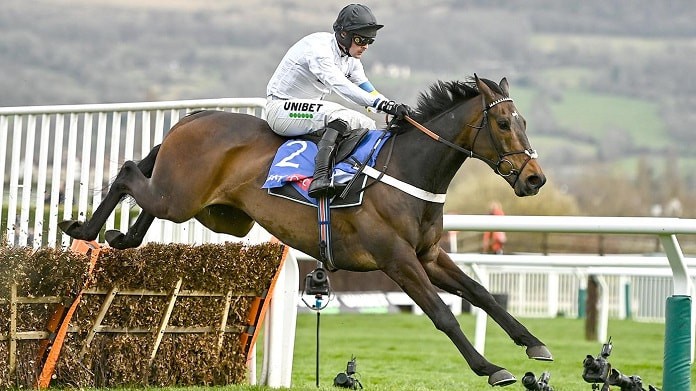 Five Fighting Fifth Hurdle 2022 entries remain in contention to run in the first Grade 1 of the British National Hunt season over the smaller obstacles. Which exciting hurdlers will we see at Gosforth Park during the track’s biggest jumps meeting? Let’s find out…

Already claimed these betting offers? Look at the top horse racing betting sites in the UK today and cover more of the market with these leading online bookies.

RELATED: Newcastle races today – Get the lowdown on the Gosforth Park racecourse

It’s appropriate given the race name that five will run in the Fighting Fifth this year. Since 2010, it has only attracted a larger field than six twice and eight horses once. This is usually a tactical race, then. SportsLens experts provide punters with profiles on all the declared runners:

Nobody can match the seven wins Seven Barrows trainer Nicky Henderson has in this race. Responsible for two of the Fighting Fifth Hurdle 2022 entries, the first of those and headline act is Constitution Hill. He could hardly have been more impressive when recording the widest-margin Cheltenham Festival result this year and turning the Supreme Novices’ Hurdle into a procession.

Unbeaten in three starts under Rules, Constitution Hill is one of the most exciting horses in training. He missed an intended engagement in the Coral Hurdle at Ascot races last Saturday, because forecast showers didn’t materialise. Henderson was prepared to risk one of his stars on unseasonably good ground.

It should be softer at Newcastle, so Constitution Hill is ready to roll. This is his first start in open company but expectations are he’ll take it in his stride. Only two five-year-olds have landed the Fighting Fifth since 2010, but this is one horse with a big future. Constitution Hill just needs to live up to the hype and his status as odds-on favourite.

Dead-heating in last year’s race was something of a surprise from Not So Sleepy but also in keeping with a history of upsets attached to this event. He warmed up for this with a fine third on the Flat in the Cesarewitch, one of biggest handicaps at Newmarket races today, at big odds of 40/1. It’s unusual to see a horse dropping back in trip switching back to hurdles.

That last time out run on the level suggests Not So Sleepy retains all of his ability, but he could face two much younger rivals open to plenty of progress here. He hasn’t won a race outright since backing up in the Betfair Exchange Trophy at Ascot in December 2020. Others in the field appeal more, for all Not So Sleepy has race fitness on his side.

Potentially back over hurdles after a couple of novice chase outings is locally trained horse Tommy’s Oscar. Punching above his weight and well-placed by a small stable last season, he struggled to match his form closer to home in the Champion Hurdle at Cheltenham. This is no easier for one of the most popular Fighting Fifth Hurdle 2022 entries either.

There’s also a difference of opinion among British and Irish bookies about the chances of Tommy’s Oscar too. Some firms have him a bigger price than others. This is likely too hot for him but nothing would raise the roof at Newcastle like Ann Hamilton’s stable star scoring a major upset.

As the rank outsider of Fighting Fifth Hurdle 2022 entries, Voix Du Reve is a hard sell. He won over this course and distance in a handicap back in March but this race demands tons more than a Class 3 contest. Iain Jardine’s runner trailed in last of six 12 months ago and, barring accidents, it’s tough to see any other outcome.

Dual race winner Epatante completes the possible Fighting Fifth Hurdle 2022 entries with Henderson pledging to run both of his top hurdlers in the race. Owned by JP McManus, who loves a runner in this, she looked as good as ever in three Grade 1 victories last season. The first of those was a dead-head with re-opposing rival Not So Sleepy.

Epatante went on to another Christmas Hurdle crown at Kempton Park races on Boxing Day and scored again when stepped up in trip for the Aintree Hurdle. This mare would be favourite for her hat-trick in this, were it not for the presence of stable companion Constitution Hill in the line-up. Even with a 7lb sex allowance, Epatante has something to find with that one on official figures.

WATCH: Epatante & Not So Sleepy Dead-Head in the Fighting Fifth Hurdle

Already Have Accounts With Our Featured Bookies? Here Are 10 Up-and-Coming Bookmakers With Top Free Bets

See our select list of some of the best betting sites – but totally trusted bookmakers, that will also have prices ahead of the the Fighting Fifth Hurdle this week at Newcastle. These ALL also have ‘must-see’ free bet sign-up offers to take advantage of. Join these bookies to get a wider range of prices and the best value possible when placing your horse racing bets.