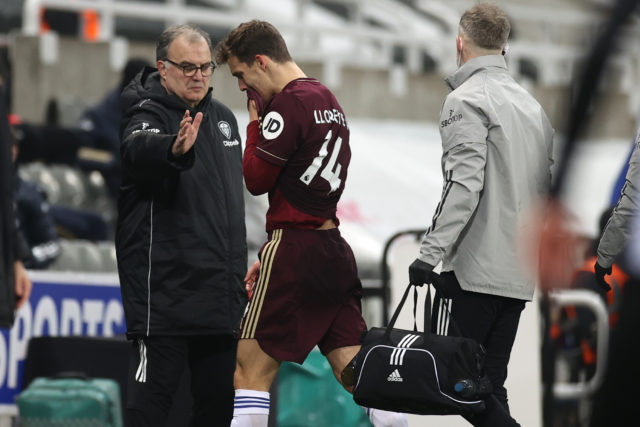 Marcelo Bielsa has said in the post-match press conference after a 2-1 win over Newcastle United that he is concerned with Diego Llorente after the Spaniard picked up yet another injury.

The 27-year-old defender was forced off early on with a hamstring problem against the Magpies at St James’ Park in the Premier League clash on Tuesday.

Bielsa commented after the match that he is worried about Llorente’s mental condition. He said, as quoted by Leeds Live: “He has a similar problem to the one he had before. It’s a problem for him, for us, for all of us.

“In this moment, what worries me is Diego’s state of mind, given the succession of injuries he has had. It’s natural that he’s sad because of this now and we share that sadness.”

The Spaniard – who joined in the summer transfer window from Real Sociedad for a fee of £18 illionm – has endured a nightmare campaign so far.

He has suffered numerous injuries in the opening few months and has managed only two Premier League games for Leeds in 2020-21.

First, he picked up a muscle injury whilst on international duty with Spain that kept him out for a while.

Llorente – who is on £22k-per-week deal at Elland Road – made his first start against Chelsea at Stamford Bridge replacing the injured Robin Koch, but he suffered an injury during that game as well.

He finally made his return against the Magpies after sharpening his fitness with the Under-23s. However, the Spaniard has now picked up a hamstring injury and he is expected to be out for a while.

The injury to Llorente is a huge blow for Leeds who are already without Koch. He is a top-quality defender who has a strong physical presence at the back, and it is sad that he is sidelined once again.