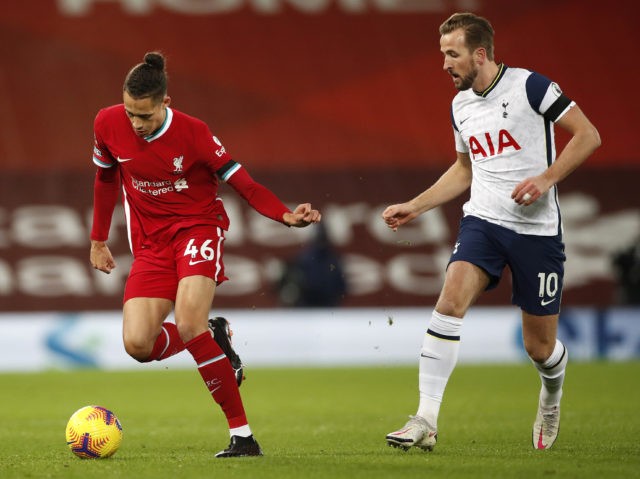 Jurgen Klopp was heavily impressed with the performance of Rhys Williams as Liverpool left it late to beat Tottenham Hotspur in the top-of-the-table Premier League clash at Anfield on Wednesday.

The teenager – who featured regularly for the Reds in the Champions League this season – made his Premier League debut for the club last night, with Joel Matip not being risked.

Klopp was also heavily impressed with the performance of Curtis Jones who has received rich accolades from the likes of Jamie Carragher and Gary Lineker after the match.

Both the academy players produced their best performances till date to take Liverpool to the top of the Premier League, leaving Klopp short of adjectives.

The Liverpool boss has hailed Williams as ‘outstanding’ who was ‘so strong in the air’. He shared his thoughts on how the 19-year-old fared against Harry Kane, who is arguably one of the best strikers in the Premier League, at this moment.

“Oh my god! Outstanding, outstanding. Come on, Rhys Williams you can imagine, it’s like the modern-day Alan Shearer he played against, Harry Kane,” said Klopp to Amazon prime.

“He is so smart, dropping in the right moments. Second half they only played long balls and actually avoided Rhys.

“They played them in the direction of Fabinho and put Harry there – so we had to really fight for these second balls – because Rhys is so strong in the air.

“But with the ball as well, he played a pass before our first goal. He has the right amount of confidence. For a 19-year-old boy you don’t have to explain to other people how it works, but you have to be confident.

“Apart from that, he just kept it simple. Super challenges, but [also] interceptions in the centre when they tried to create counter-attacks, he didn’t drop too early so he won these balls. Absolutely incredible game, I have to say.”

Jones was simply outstanding on the night. The 19-year-old midfielder was superb against Fulham as well, but he took his game to the next level against Spurs.

He is growing in confidence with every single game. Jones played a part in Liverpool’s opening goal where he exchanged a one-two with Mohamed Salah whose shot took a deflection off Toby Alderweireld before looping into the net.

Jones is becoming a key player for Liverpool, and Klopp has hailed him as a top-class player.

He added: “And Curtis is Curtis. Our boy. Thank God. Imagine you have to sign him. He’s already here four years and wants to stay, so that’s a top, top-class player.”

With Thiago Alcantara, Naby Keita and Alex Oxlade-Chamberlain likely to return to full fitness in a few weeks’ time, Liverpool are expected to get even better.