Welcome to our guide to all things Inter Milan. In this article you will learn everything that there is to know about the Italian giants, including the trophies that they’ve won, information on their players, managers, transfers and rivalries. Read on to become an Inter Milan expert.

One of the founders of Inter was a painter named Giorgio Muggiani. He came up with the design for the Inter Milan badge in 1908, featuring the FCIM initials within a series of circles. Though the colours and details have changed over the years, that basic concept has remained in place.

A little known fact about Inter is they are the only club from all Serie A teams never to be relegated from Italian football’s top division. One of the country’s most successful sides, they dominated the domestic scene in the mid-1960s and for the second half of the 2000s.

When it comes to the Inter Milan away kit, the traditional colour of the shirt is white. However, in recent years the Inter Milan jersey for away games has seen many different colours used.

Inter Milan have been champions of Italy on 19 occasions. This includes four successive Serie A titles between 2006 and 2010 with the previous season’s Scudetto also awarded to them. The club have also been very successful in European competitions.

Inter Milan are generally a short price to win the Scudetto on Serie A betting sites, not to mention the Coppa Italia, and this season is no exception. Here are their odds to win the domestic trophies in Italy this season, along with the latest Inter Milan Champions League price:

Some extremely talented footballers have been part of the Inter Milan team over the years. In this section we’re going to look some of the legends that have represented the club and highlight the current options available to Inter.

Italian football is famed for the quality of the defending and the Inter backline has seen talents such as Giuseppe Bergomi, Andreas Brehme, Tarcisio Burgnich, Ivan Cordoba, Fulvio Collovati, Giacinto Facchetti, Ricardo Ferri, Lucio, Marco Materazzi and Walter Samuel at the San Siro. The current crop of defenders look like this:

Inter Milan Players with Most Appearances

The best teams need loyal players who can bridge the generations with their service. Here are the players that were involved in the most Inter Milan fixtures during their time at the club.

Some of the most talented forwards in the world have worn the black and blue of Inter Milan. Here are the top ten all-time goalscorers for Inter Milan.

As one of the richest clubs in Italy and the world, Inter have made some huge signings and sold some brilliant players for massive fees. In this section we’re going to run through some of the biggest transfers involving the club.

A lot of Inter Milan news relates to their actions in the transfer market. Here are there top ten biggest signings.

An inevitability when you have had as many good players as Inter Milan, is that other big clubs will want to sign your players. Here are the biggest ever player sales achieved by Inter over the years:

There is a high expectation when it comes to Inter Milan results. Failure to lands trophies won’t be tolerated for too long and consequently, the club have had a lot of managers since their formation. Here is the complete history of their managerial appointments. 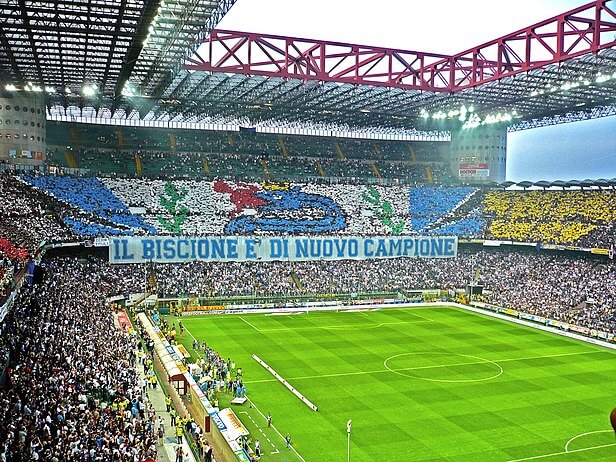 The Stadio Giuseppe Meazza, more commonly known as the San Siro, is the home to Inter Milan. AC Milan also play at the San Siro, with the teams alternating each week for home games.

With a capacity of 80,018, the San Siro has one of the biggest capacities of any football stadium. Inter and AC Milan have agreed to work together to build a new stadium to replace the San Siro, that will be next to the current ground.

As one of the biggest and most successful clubs in both Italy and Europe, Inter Milan have built up some big rivalries. In this section we’re going to profile some of the teams that Inter fans love to hate.

With the teams involved sharing the same stadium, the Derby della Madonnina between Inter Milan and AC Milan, is about as local as things can get. Madonnina translates as ‘Little Madonna’ and relates to the statue of the Virgin Mary at the top of the Duomo in Milan.

Inter are traditionally the team of the bourgeoisie of Milan, while AC Milan were the club for the working classes of the city. Guaranteed to meet twice a season in Serie A, the Milan clubs have also faced each other in both domestic and European cup games over the years. Here is the full breakdown of Inter Milan vs AC Milan results.

The biggest fixture in Italy is the Derby d’Italia between Juve and Inter Milan. It’s the equivalent of El Clasico in Spain, with the Derby of Italy tag being coined by the journalist Gianna Brera in 1967.

With Juventus hailing from Turin, this is in part a rivalry based on geography, with the clubs coming from the two biggest cities in Northern Italy, though both clubs have supporters based across the country. They are also both very successful and have battled for trophies over the years. Here is the breakdown of Inter Milan vs Juventus results.

Rivalries can build against foreign teams in European competition. The Inter Milan vs Liverpool rivalry started in the 1964-65 season, when the teams met in the semi-finals of the European Cup. In the first-leg at Anfield, Inter took the lead, only for Liverpool FC to eventually win 3-1. The return fixture saw Inter Milan score three times without reply and win the game 4-3 on aggregate.

The teams faced each other most recently, in the last-16 of the 2021-22 Champions League. On that occasion, the Premier League team Liverpool won the first-leg 2-0 at the San Siro and though Inter won the second-leg 1-0, they were eliminated on aggregate.

Another team that Inter Milan faced in the 2021-22 Champions League was Real Madrid. They were drawn together in the group stage, which was also the case in 2020-21, with Real Madrid winning all four games.

There is deep history to the Real Madrid vs Inter Milan fixture. Real Madrid knocked Inter out at the semi-final stage of the UEFA Cup in both the 1984-85 season and 1985-86. Most famously, Inter Milan defeated Real Madrid in the final if the 1963-64 European Cup, winning 3-1.

Our Recommended Bookie for Serie A Betting

Available to new customers only. Make a qualifying deposit of £5* or more and claim the offer within 30 days of registering your account to qualify for 500% of that amount in Bet Credits, up to a maximum of £50* in Bet Credits. Once released, your Bet Credits will be held in your account balance and are non-withdrawable.
To release your Bet Credits for use, you must place qualifying bets to the value of your qualifying deposit (capped at £10*) and they must settle within 30 days of claiming the offer. Only qualifying bets placed and settled after claiming the offer will count towards this requirement.
Apple Pay, Google Pay, PayPal, paysafecard and all other prepaid credit and debit cards, where available, cannot be used for either your qualifying deposit or any subsequent withdrawal of returns from Bet Credits stakes unless we have successfully verified an accepted form of your Identity Documents and you have entered a Postal Verification Code (PVC), or we have successfully verified two accepted forms of your Identity Documents. See condition 2 of full Terms and Conditions for details.
Bets placed must meet certain conditions to count towards the release of your Bet Credits:
Must contain at least one selection at odds of 1/5 (1.20) or greater.
Only the largest cumulative stake on an individual selection within a market/fixture combination (either pre-match or In-Play) will count towards the settled bets requirement.
Where a stake has been partially Cashed Out, only the remaining active stake will count.
Where a bet has been edited using our Edit Bet feature, only the new stake on the new bet will count.
Fully Cashed Out, Instant Games, Gaming, void bets or In-Play bets which are settled as a push will not count.
Your Bet Credits are non-withdrawable, and Bet Credits stakes are not included in any returns. Any returns from Bet Credits placed will be added to your Withdrawable Balance. Bet Credits cannot be used on certain products, offers/promotions and bet types. See full Terms and Conditions for details.
Your Bet Credits will be forfeit and removed if your account is inactive for 90 consecutive days.

Who has more fans AC or Inter Milan?

Inter Milan are the second most supported team in Italy, behind Juventus. AC Milan rank third, with less fans nationally and in the city itself than Inter, though they do have more fans across the world.

How many scudettos does Inter Milan have?

In total, Inter have won 19 Serie A titles throughout their storied history. They most recently lifted the trophy and claimed the Scudetto at the end of the 2020-21 season.

Why are they called Inter Milan?

Inter was founded in 1909, after a split with the Milan Cricket and Football Club. The founders were frustrated at the dominance of Italian players and wanted to create a club that welcomed foreigners, naming it Football Club Internazionale Milano. This is shortened to Inter Milan, its popular nickname we know today.

Who is the greatest Inter Milan player of all time?

Giuseppe Meazza played for both Milan clubs and the San Siro’s full name is the Stadio Giuseppe Meazza in his honour. The forward spent the bulk of his career at Inter and is the club’s record goalscorer. Argentina defensive legend Javier Zanetti is the record appearance maker with 858 games for the club.

Name some of Inter Milan’s biggest rivals domestically and in Europe?