This is our complete guide to Liverpool FC. Read on to discover everything you need to know about the famous English team, including a full list of Liverpool Football Club (LFC) honours won, information on players past and present, rivalries and managers. You can also check in regularly for the latest Liverpool FC news.

A dispute between the committee of Everton and the club president John Houlding, who owned the land at Anfield where Everton played at the time, saw the birth of Liverpool FC. Everton moved to Goodison Park in 1892 and Houlding founded Liverpool FC to play at Anfield.

The city symbol of the liver bird was adopted as the main focus Liverpool FC badge in 1901. It did not appear on the Liverpool FC shirt until 1955. While most of their success dates back before Premier League teams were a thing, they did finally win the title again in 2020.

For away games, Liverpool FC have traditionally won yellow or white shirts with black shorts. However, in recent years a variety of colours have been used for the away kit.

Liverpool FC have won more trophies than any club in England. They have the second most English league titles, with only their rivals Manchester United having won more.

They are the most successful English club in Europe, with six European Cup / Champions League wins and three UEFA Cup / Europa League victories. In 2019 they were crowned as world champions for the first time.

Liverpool FC came close to winning a quadruple in the 2021-22 season, ending up with two cup wins. How many trophies will they win this season? Here are their odds to win every competition that they’re involved in, including the latest Premier League betting and Liverpool FC Champions League odds for this season:

Liverpool FC has been home to some of the most talented played in football history. In this section we’re going to run through each position, highlighting some of the greats that have played for the club in the past in those roles and the present options for the Liverpool FC team.

Great teams are built on a great goalkeeper and Liverpool FC have had plenty. Ray Clemence, Jerzy Dudek, Bruce Grobbelaar, Tommy Lawrence and Pepe Reina are amongst the former keepers of the club. Here are the current first-team goalkeepers for Liverpool FC.

Liverpool FC have had some brilliant full-backs and central defenders. Amongst the best include Jamie Carragher, Alan Hansen, Sami Hyypia, Alan Kennedy, Chris Lawler, Mark Lawrenson, Phil Neal, Steve Nicol, Tommy Smith, Phil Thompson and Ron Yeats, many of whom were Liverpool FC captain. This is the current list of defenders.

Liverpool FC have had many fine forwards to provide and score their goals. This include the likes of John Aldridge, Peter Beardsley, Kenny Dalglish, Robbie Fowler, Roger Hunt, Kevin Keegan, Billy Liddell, Sadio Mane, Michael Owen, Ian Rush, Luis Suarez, Fernando Torres and John Toshack. These are the current crop of forwards you will see in the Liverpool line-up.

Liverpool FC Players with Most Appearances

Liverpool’s most successful teams were built on core personnel that remained in place for many years. Consequently, these players racked up many hundreds of Liverpool FC match appearances. Here are the ten players who have played the most games for Liverpool FC.

The many years of domestic and European domination saw Liverpool players score lots of goals. The following list shows the footballers that have scored the most goals for Liverpool FC.

Liverpool’s success has been in large part built on bringing through youth players and unearthing gems for very little money in the transfer market. Yet they have also spent big over the years and balanced the books by regularly selling players for large fees. In this section we’re going to examine Liverpool’s transfer history.

Liverpool FC today are one of the richest clubs in the world. Here are their top ten biggest ever signings.

The Liverpool FC transfer budget has been given a major boost over the years, by player sales. Here are the top ten biggest fees received by Liverpool FC when selling players.

For a club that was founded way back in 1892, a relatively small number of men have been employed as Liverpool manager over the years. This speaks of two things. The loyalty of their employers and the fact that many managers of the club have been successful and long-serving. Here is the full list of Liverpool FC managers.

Liverpool FC Stadium - This is Anfield 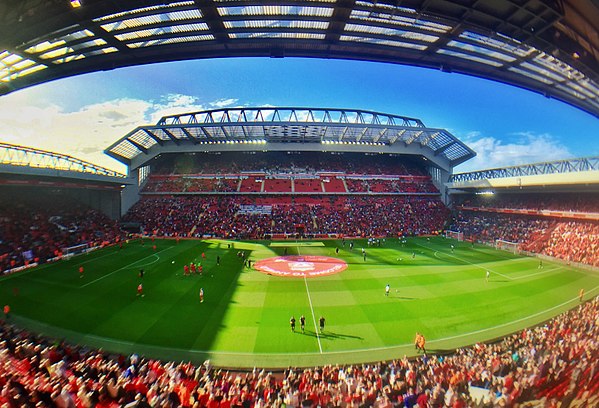 Home Liverpool FC fixtures are played at Anfield. It’s been the home of the club since it was founded in 1892, having previously played host to Everton.

The record attendance at Anfield is the 61,905 spectators that watched Liverpool’s match with Wolves in 1952. These days it holds 53,394, but redevelopment of the Anfield Road Stand will increase the total capacity to around 61,000.

Liverpool have many rivals. Some of these rivalries are built upon local antagonism, while others have developed while competing for trophies, both at home and abroad. In this section we’re going to examine some of the fiercest rivalries that Liverpool FC enjoy.

Liverpool vs Everton - The Merseyside Derby

The closes rivals of Liverpool FC are Everton, who also hail from the city of Liverpool. There is less than a mile between Liverpool’s home of Anfield and Everton’s Goodison Park. In the eighties it was dubbed ‘the friendly derby’, with the 1984 League Cup Final between the teams and the 1986 FA Cup Final, seeing a lack of segregation between fans and scenes of Liverpool and Everton supporters watching the game side by side.

In both the sixties and the eighties, Liverpool FC and Everton competed for trophies against each other. In recent decades Liverpool have been far more successful, but the Merseyside derby has remained a competitive match. Here is the full record of Liverpool FC results against Everton.

Liverpool FC and Manchester United are the two most successful clubs in England. Throw in the geographical antipathy between the two biggest cities in North West England and you have the recipe for a fierce rivalry.

It’s the biggest fixture in English football, comparable with El Clasico in Spain. Manchester United have won the English title more often, but Liverpool have been crowned as champions of Europe on more occasions. Here’s is the breakdown of results between the teams.

In recent years, Liverpool FC have developed rivalries with English teams that they have been competing with for trophies. One such side is Chelsea, who due to an influx of investment, became one of the most successful clubs in the world over recent years.

The 2021-22 season saw Liverpool face Chelsea in both domestic cup finals and they won both of them on penalties. They have also met on several occasions in the Champions League over the years.

In recent seasons Liverpool’s main rivals in the pursuit of trophies have been Manchester City, rather than United. Only Jurgen Klopp’s Liverpool side have been able to challenge and sometimes get the better of Pep Guardiola’s Man City on a consistent basis.

They’ve also met regularly in cup competitions. Manchester City beat Liverpool in the final of the 2016 EFL Cup, while Liverpool won both legs of their Champions League quarter-final in 2017-18. Here’s the full breakdown of their results.

For a long time Arsenal were a bogey side for Liverpool in cup finals. The Gunners beat Liverpool FC in the FA Cup Finals of 1949-50 and 1970-71. They also defeated Liverpool in the League Cup Final of the 1986-87 season.

Liverpool FC took some revenge in 2000-01 when they came from behind to win 2-1 in the FA Cup Final. Here are the results between the club and Arsenal.

That was the last time that Liverpool beat Real Madrid in the competition, with the Spanish giants winning five and drawing one of the subsequent encounters. This included the finals of the Champions League in both the 2017-18 season and in 2021-22.

Another club that Liverpool have met more than once in a European final is the Rossoneri. Most famously, Liverpool FC fought back from being 3-0 down at half-time in the 2005 Champions League final against AC Milan, to draw 3-3 and then win the resulting penalty shootout.

Read review
Visit BetUK
Learn More Close Learn More
18+ BeGambleAware.org, T&Cs apply. Full T&C’s Apply. New customers on mobile only. 7 days to claim and stake £10 minimum bet at odds of 1.5 or greater to qualify. Free, void, cashed out or partially cashed out bets do not qualify. Max 3x £10 free bets credited on bet settlement. Free bets must be used on 4 or more selections with selection odds of 1.3 or greater. Free bets are non-withdrawable and stake not returned with winnings. 7 day expiry
£10
UKGC

Liverpool are owned by the Fenway Sports Group, which is managed by John Henry and Tom Ferner. The American company also own the MBL team the Boston Red Sox and the NHL team the Pittsburgh Pirates.

What do you call a Liverpool FC fan?

Liverpool fans are sometimes knows as Kopites. This is a reference to the famous Kop stand at Anfield.

You’ll Never Walk Alone is a song from the 1945 Rogers & Hammerstein musical Carousel. A version was recorded by the Liverpool-based band Gerry and the Pacemakers in 1963, which became a number one hit in the UK. Liverpool fans began singing the song and it became their anthem.

Who are the main rivals of Liverpool FC?

Liverpool’s geographical rivals are Everton, who are also based in the city of Liverpool. Their main rivals are Manchester United, who along with Liverpool are the two most successful clubs in England. Manchester and Liverpool are located near each other in the North West of England. In Europe, they've faced the likes of Real Madrid, Barcelona and Inter Milan in recent years, but their most memorable rivals are AC Milan.