Borussia Dortmund, also known as BVB, is one of the biggest football clubs in Germany. Based at the famous Westfalenstadion, Dortmund are 8x German champions. Having also won the UEFA Champions League in 1997, BVB is a well-known team across the globe. The club was founded in 1909, our guide guide will cover everything surrounding Borussia Dortmund F.C, including key players, the current coach and past honours. 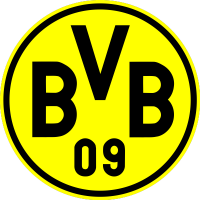 Having been established for over a century, Borussia Dortmund is based in North Rhine-Westphalia, West Germany. The football team is part of a larger sports club, which now features close to 150,000 members. BVB plays its home matches at Westfalenstadion, which with a capacity of over 81,000, is the biggest stadium in Germany.

Borussia Dortmund famously plays in black and yellow, the reason behind the club’s nickname of die Schwarzgelben. Dortmund holds strong rivalries with both Schalke 04 and Bayern Munich. Matches involving the latter are known as Der Klassiker. BVB is well-known for developing young talent, with recent starlets having included Ousmane Dembele, Jadon Sancho and Erling Haaland.

The club’s logo features “BVB 09”, which stands for Ballspiel-Verein Borussia (Borussia Club for Ball Games). Again, black and yellow dominate. While the logo has changed over the years, its design has stayed almost identical. The current BVB logo has been the same since 1993, featuring a bolder font and just one black ring around the circle.

The Borussia Dortmund kit is always striking. While the Borussia Dortmund home kit changes in design each season, black and yellow is always the colour scheme. Puma has been the official kit supplier of BVB since 2012, with the current away shirt being all black, with yellow trim and player names/numbers.

Borussia Dortmund has won a host of domestic and international competitions to date. Unfortunately for BVB fans, Dortmund has not won the Bundesliga title since 2012, largely due to the success of rivals Bayern Munich. However, the table below shows the honours for Borussia Dortmund F.C. over the years:

Dortmund won the DFB-Pokal in 2021, while they will be hoping to end their long wait for the Bundesliga title this season. BVB are often offered short odds to win competitions in which they are involved in. The table below shows the odds available surrounding Dortmund in 2022-23, which come from leading online bookies:

When it comes to well-known Borussia Dortmund players, many in the table below feature. This is due to the fact that they have put on the famous Borussia Dortmund kit hundreds of times. Current Sporting Director Michael Zorc holds the record in this area, making 572 appearances. You will no doubt recognise some of the others making the top 10 list:

BVB is a team that is known for playing football the right way, scoring plenty of goals in the process. Over the years, Dortmund has been the home of many leading goalscorers. You may be surprised to learn that Robert Lewandowski does not feature in the top 10. However, the table below shows those that have written themselves into Borussia Dortmund F.C. folklore with their prowess in front of goal:

As we have previously mentioned, Dortmund is a team that develops young talent, before selling their prized assets for a significant profit. There are numerous examples in the past, with the club currently sitting on a large transfer budget, following the departure of Erling Haaland. The table below the biggest signings in BVB history:

Meanwhile, the table below shows Dortmund’s record departures over the years, with the club having done some fantastic work in this area:

The current Borussia Dortmund manager is Edin Terzić. However, it has been something of a managerial merry go round over recent years. Terzić only took over in 2022, following the departure of Marco Rose.

The Croatian-German has been working at BVB since 2015, acting as caretaker manager, assistant manager and technical director. Dortmund fans will certainly be hoping that the 39-year-old can deliver success to the club. Below is a list of Borussia Dortmund managers from years gone by:

Officially known as Signal Iduna Park, the Borussia Dortmund stadium is better known in the game as Westfalenstadion. With a capacity of 81,365 for domestic matches, Dortmund fans create a unique atmosphere, it is widely regarded as being one of the best in world football. The stadium opened in 1974, having most recently been renovated in 2006. The record attendance at the Borussia Dortmund stadium is 83,000, a figure that has been reached six times.

Like any team, Borussia Dortmund has a handful of rivalries. Matches involving their rivalries mean a great deal to the players and supporters. Some rivalries are simple because of location, while others build over time due to regular or standout encounters. Let’s take a closer look at Dortmund’s biggest rivals:

When it comes to German football, there is no bigger fixture than Borussia Dortmund vs Bayern Munich. Games involving the duo are known as Der Klassiker. Ultimately, it is Bayern that has had the better of things over the years, with The Bavarians having won the Bundesliga title every year since 2011.

The duo also met in the 2013 Champions League final, where Arjen Robben scored a last-gasp winner for Bayern. The table below shows the head-to-head record between the two German giants:

Known in Germany as the Revierderby, matches between Dortmund and Schalke are almost always entertaining. The two clubs are based in the Ruhr region, the first encounter between the duo came back in 1925. Schalke has just been promoted back to the German top-flight, meaning that this rivalry will return to the Bundesliga in 2022/23. Let’s take a look at the history books between Dortmund and Schalke:

Dortmund and Scottish giants Rangers have met a number of times in European competitions over the years. The first clash came in 1966, with the two having also met in the Europa League in 2022. Rangers knocked Dortmund out of the competition 6-4 on aggregate, having won 4-2 in Germany. Below is the head-to-head record surrounding Rangers vs Borussia Dortmund:

Tottenham Hotspur and Dortmund have been drawn together in Europe three times since 2016. The duo has met in both the Europa League and Champions League, with 17 goals having been scored in just six matches. Spurs have won their last four matches against BVB.

If you are familiar with European football, Borussia Dortmund is a club that you will be more than familiar with. The German giants may live in the shadow of Bayern Munich, but they are popular across the globe. With a unique strategy in the transfer market, Dortmund will be looking to claim their first Bundesliga title since 2012. With a new manager and a new-look attacking lineup, it could well be an interesting season at Westfalenstadion.

Read review
Visit Site
Learn More Close Learn More
18+ BeGambleAware.org, T&Cs apply. Full T&C’s Apply. New customers on mobile only. 7 days to claim and stake £10 minimum bet at odds of 1.5 or greater to qualify. Free, void, cashed out or partially cashed out bets do not qualify. Max 3x £10 free bets credited on bet settlement. Free bets must be used on 4 or more selections with selection odds of 1.3 or greater. Free bets are non-withdrawable and stake not returned with winnings. 7 day expiry
£10
UKGC

Where is Borussia Dortmund?

Borussia Dortmund is a football club based in Dortmund, North Rhine-Westphalia, a region of West Germany.

What does BVB mean in Borussia Dortmund?

BVB stands for Ballspielverein Borussia 09, which translates to “Ball-Playing Club” in English.

What are the best betting odds on Borussia Dortmund?

For the 22/23 season, the best odds on Dortmund is to win the DFB-Pokal. At the time of writing this guide, BVB were priced at 4/1 to win the German Cup.

Who takes the penalties for Borussia Dortmund?

Now that Erling Haaland has departed the club, it remains to be seen as to who will take Dortmund’s penalties this season. It is likely that Emre Can and Marco Reus will step up.

Who are Dortmund’s biggest rivals?

Borussia Dortmund has a strong rivalry with both Schalke 04 and Bayern Munich. The rivalry with Schalke is more due to geography, while Bayern regularly finish above BVB in the Bundesliga standings.

Who is Dortmund’s record goalscorer?

With 174 goals between 1945-1959, Alfred Preissler is the record goalscorer at Dortmund. Of the current Borussia Dortmund squad, it is Marco Reus who leads the way.