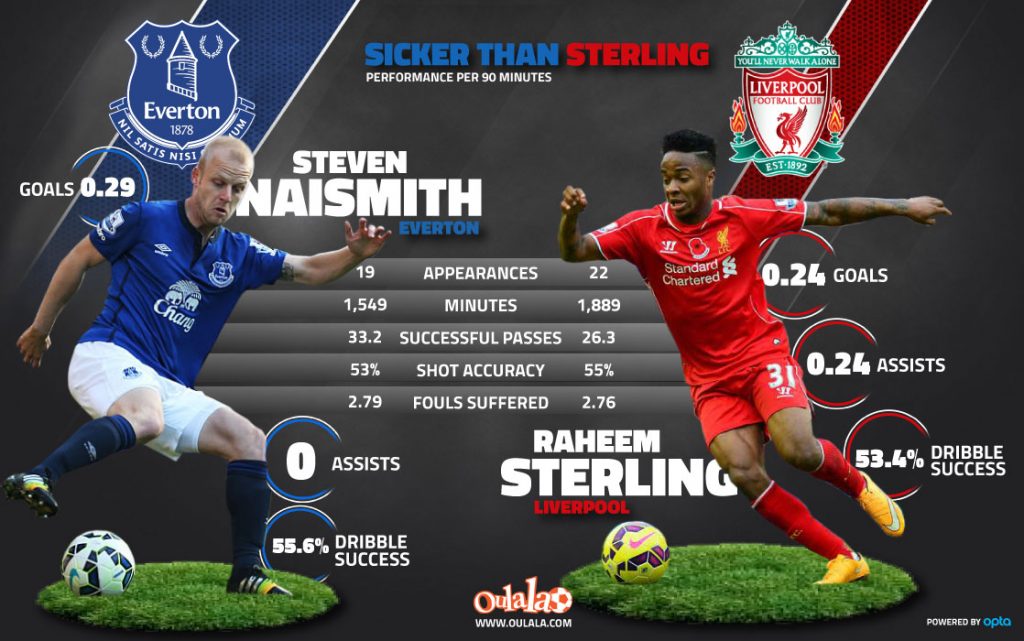 Everton host Liverpool at Goodison Park on Saturday in the 224th Merseyside derby after the two sides shared the spoils in a 1-1 draw at Anfield earlier this season.

With five places and 12 points separating the two clubs in the Premier League both will approach the clash with differing agendas.

Everton sit in an unfamiliar 12th place, 6 points adrift of the top half and 7 away from the relegation zone. Victory over their rivals would be the boost needed to galvanize Roberto Martinez’s men going into the final third of the season.

Liverpool’s focus is firmly on their charge for Champions League football next season. The Reds sit just 4 points off the top four and with Daniel Sturridge returning at a critical stage of the season, Brendan Rodger’s side appear ready to mount a serious challenge to those above them.

Our friends over at Opta powered fantasy football game Oulala have taken a closer look at the game and have identified Steven Naismith of Everton and Liverpool’s Raheem Sterling as the key-men.

The stats reveal that Naismith is currently outshining his opponent. That will be no surprise to Evertonians who regularly praise the forward’s effort and work-rate week-in, week-out but to others the results may come as a surprise. Naismith edges Sterling in four of the six main performance criteria per 90 minutes.

The match has everything required in promising to be another derby classic between the two clubs.