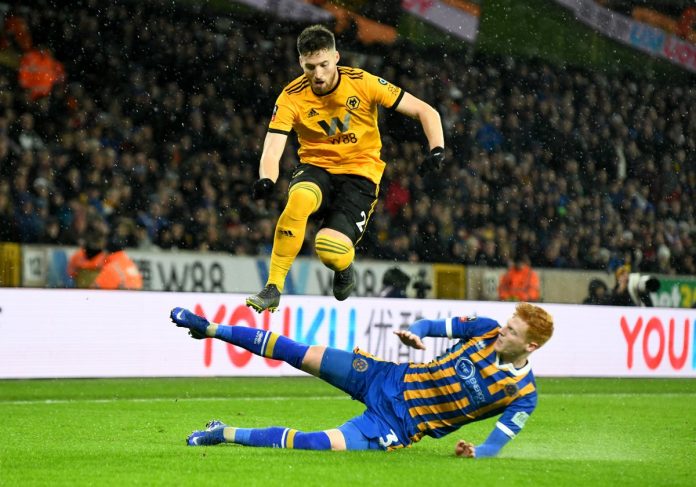 Wolverhampton Wanderers progressed through to the next round of the FA Cup after winning a pulsating thriller against Shrewsbury on Tuesday.

Nuno Espirito Santo’s side earned a 3-2 victory over Shrewsbury at Molineux to book their place in the fifth round of the FA Cup.

Matt Doherty was superb throughout the game.  The 27-year-old scored two goals and provided the assist for Ivan Cavaleiro as Wolves emerged victorious.

Some Wolves fans took to social networking site Twitter to express their reaction on Doherty’s performance.

Thought Ivan Cavaleiro took his goal very well and looked a lot livelier after it. Adama Traore had a positive and more productive second half. But Matt Doherty was my man of the match, and not just for his two goals. #WWFC

Just got back in stoke, not our best performance tonight but we did enough. Traore was much better playing out wide running at people and Doherty top class again. Surely Costa is running out of chances now? onto Bristol in next round #wwfc

Despicable when a caveman like Martin o Neill said matt doherty had to improve nearer the final third, Doherty is some footballer, what a performance tonight.#wwfc

Job done. We did it the hard way but this club doesn’t know any other way of doing things. What an incredible season Doherty continues to have. And what’s happened to Costa? But tonight is about the team and the dream is still alive. #WWFC

Got there in the end. Doherty saved our bacon tonight, getting away with a poor first half. Traore was MOTM for me. He battled, had them on toast and was a constant threat. Less said about Costa the better, don’t know what’s gone wrong there. #WWFC

Doherty has been in excellent form this season. He has scored six goals and created further six for his teammates in all competitions this season.

Wolves took an early lead through Doherty before the League One side equalised with a James Bolton header.

Josh Laurent gave the visitors a surprise lead as goalkeeper John Ruddy let the ball slip through his hands. Doherty restored parity in first-half injury time before setting up for Ivan Cavaleiro in the 62nd minute to wrap up the game.