Liverpool boss Brendan Rodgers has admitted that his first signings as Reds boss are not too far away, with the team’s attack in need of a revamp. With Andy Carroll looking surplus to requirements in the Northern Irishman’s thoughts, sprightly Roma striker Fabio Borini has been identified as a more agile replacement. However, Fulham forward Clint Dempsey is also a name that has been consistently linked with a move to Anfield – but where would he fit into the Liverpool setup?

The second-half of the season slump that saw the Merseysiders finish eighth in the Premier League last term and cost Kenny Dalglish his job was largely down to a lack of goals and some substandard finishing at times. A total of 47 goals in the 38-game campaign is simply not good enough for a team with top-four ambitions and Rodgers has correctly identified this as an area where reinforcement is needed.

The former Swansea boss’ offensive approach at the Liberty Stadium side should have the Kop witnessing a more forward-thinking team next term, but the personnel needs to be right. It will be interesting to see where the former Swans boss opts to deploy talisman Steven Gerrard, but a berth in central midfield rather than out wide or in behind a striker seems likely.

Luis Suarez’s glimpses of brilliance were a rare bright spark last season, and the side will continue to look to the Uruguayan for inspiration. However, the South American needs assistance, as in a second striker role he needs a hitman to feed off. Presumably this is where Borini fits into Rodgers’ plans. 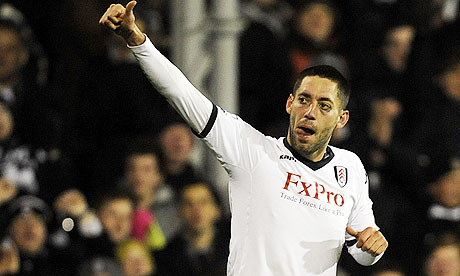 Dempsey took almost the sole goalscoring responsibility at Craven Cottage last term, with 23 goals in the campaign an excellent return for the United States international. The 29-year-old has become the main man for Martin Jol’s side, and has played in numerous different positions with minimal fuss. If and when he does move to Anfield, Dempsey has the potential to complete a Liverpool team set up in the same style as Rodgers’ Swansea.

A central midfield three of Britten, Sigurdsson and Allen would be replicated presumably by Gerrard, Lucas and Adam/Henderson, with three attackers ahead of this. Borini would act as the Danny Graham type centre forward, with Suarez and Dempsey given the leniency to roam, start from wide and support the main striker.

The American’s determination on the pitch, quality on the ball and added goal threat would surely be an asset an Anfield, but one feels that Liverpool need him and a new out-and-out striker to prevent over-dependence on Suarez and complete a more rounded attacking line-up.