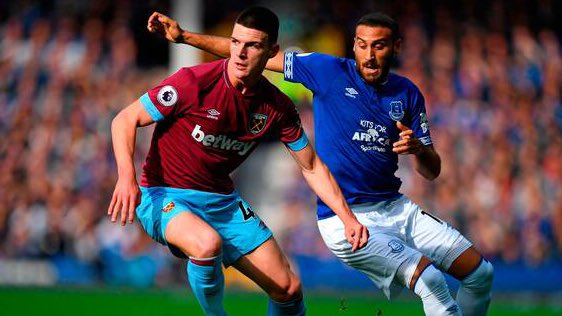 After losing four games in a row, the Hammers bounced back strongly and earned a fantastic 3-1 win over the Toffees at Goodison Park.

Andriy Yarmolenko scored twice, while Marko Arnautovic added another for the Hammers.

Just before the break, Gylfi Sigurdsson powered in a header from Jonjoe Kenny’s cross, but Cenk Tosun missed two good opportunities to score.

It was a brilliant team performance from the Hammers, but one player who really impressed was Declan Rice.

The 19-year-old was outstanding in the defensive midfield role. He was very good with his passing and was defensively very solid.

West Ham fans have praised him heavily on social networking site Twitter, with many claiming him to be the future captain of the club.

Declan Rice is some player. Played such a big role in the victory by controlling the midfield and showing a lot of maturity at such a young age. pic.twitter.com/sxkjNGgmqi

What a performance from Declan Rice today. Executed his role in front of the back four to perfection. Brilliant ?

The victory meant that West Ham have moved out of the bottom three. They are 16th in the Premier League table, one point and a place behind Fulham.