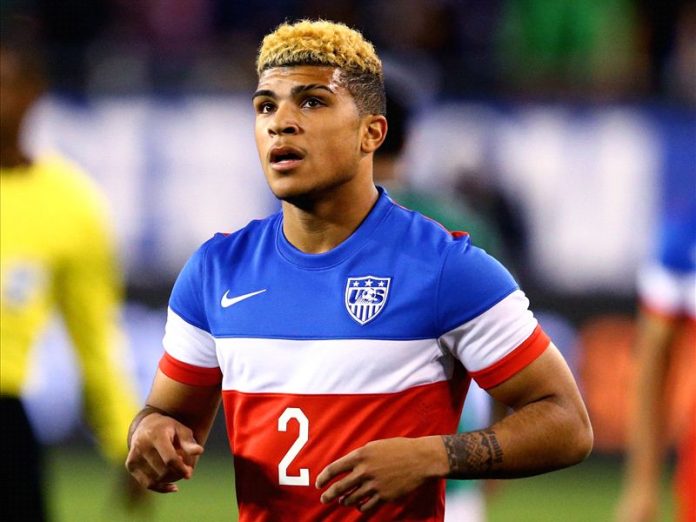 The 21-year-old World Cup veteran could be heading to White Hart Lane in London, Eng.

U.S. international right back DeAndre Yedlin was across the Atlantic Ocean on Friday, finalizing the deal with a “big club” in Europe, instead of attending practice at Seattle, WA.

“DeAndre is overseas,” General Manager Adrian Hanauer told MLSSoccer.com on Friday, addressing the absences of the 21-year-old right back. “Obviously we’re not going to give out a lot of detail. … Certainly something we’re working toward is a potential transaction.”

The Seattle native is on the verge of going to Europe and most likely the U.S. international right back will be heading to the English Premier League side Tottenham Hotspur FC for around the amount of $3.2 million or $3.5 million, according to Ives Galarcep.

Even though Hanauer and Sounders Head Coach Sigi Schmid will not give out the name of the team Yedlin is near signing a contract with. The young speedy defender flew to London on Thursday to undergo a physical for the Spurs, and two attempt to cross the final bridge to secure the signature of the American right back.

However, the news was first presented to the public by ESPN analyst Taylor Twellman right before the Major League Soccer AT&T All Star game on Wednesday. He hinted that the young World Cup veteran is on the verge of becoming a Spur.

For Sounder fans, Yedlin signing with Tottenham does not mean that the U.S.international will be leaving right away from Century Link Field, instead this contract will keep the speedy defender in Major League Soccer for the rest of the season. After this season the Seattle native, will either return to London to fight for a spot on the Spurs roster or the U.S. international will be loaned to get more play time to develop.

“This will be a deal where he won’t be immediately transferred and then loaned back,” Sounders GM told MLSSoccer.com. “It will be a deal that is constructed in a way that potentially he would be here through the end of the year, potentially longer.”

Regardless, if both sides agree to the terms Yedlin will have a speed block in his way, acquiring the tricky English work visa. Recently, this obstacle proved to be too big for U.S. international forward Juan Agudelo. The young Colombian/American has almost double the amount of caps for the Senior U.S. National team than Yedlin, and he was rejected twice at the ending of 2013 and right before the summer.

Though until both teams agree on a contract, Yedlin and the Spurs do not have to worry about that road block just yet. However, Schmid is expecting the 21-year-old right back to play against the Houston Dynamo on Sunday at Century Link Field in Seattle, WA.