Manchester United made it seven wins from their last eight on Boxing Day with a comfortable 3-1 victory over Newcastle United.

Meanwhile, Tottenham relied on a Christian Eriksen free kick to see off struggling Leicester City but Maurico Pochettino’s side have now won four in a row in all competitions, with three successive 2-1 victories in the Premier League.

The London side haven’t fared very well at all of late against the top sides in the Premier League but have home field advantage after a two-day rest on Sunday.

Mauricio Pochettino has a fresh bill of health to choose his eleven to face Manchester United tomorrow.

Defenders are coming back but Marcos Rojo, Luke Shaw and Chris Smalling all remain absent. Rafael got a late run out versus Newcastle and is in contention to start this one.

Ángel Di María has suffered a fresh setback and will not face Tottenham. Marouane Fellaini and Daley Blind are out until the New Year, Adnan Januzaj has a cold but Ander Herrera could feature.

Radamel Falcao has started the last two and it will be interesting to see if the Colombian is fit enough to start a second game in three days. 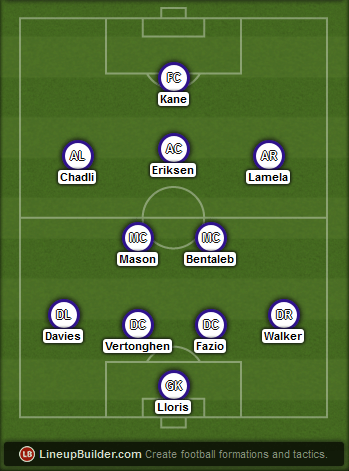 This is Mauricio Pochettino’s favourite lineup of late and unless any players are tired from Boxing Day we don’t expect there to be any changes. Harry Kane has been in form up front whilst Christian Eriksen is the playmaker in midfield. 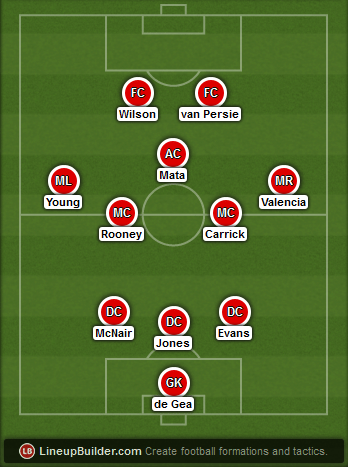 Louis van Gaal has been using a back three to some success of late. They have relied on David de Gea a lot though. A number of absentees at the back restricts them somewhat but with the likes of Wayne Rooney, Michael Carrick and Juan Mata in midfield they can look to retain the majorityof possession in this game. We’re thinking Radamel Falcao will need a rest this weekend whilst the Dutch manager will want to keep two strikers up front because Tottenham’s defence isn’t the strongest and is there for the taking.

Robin van Persie vs Federico Fazio
Tottenham have conceded a goal in each of their last three games, versus Leicester City, Burnley and Swansea City respectively. They face a tough challenge if they’re to shut out the in-form former Gunner at White Hart Lane. Federico Fazio has had some difficult spells to begin his Tottenham career and playing inside Kyle Walker should be an area of the field Manchester United look to exploit.

Christian Eriksen vs Michael Carrick
Christian Eriksen scored against Manchester United in a 2-1 win at Old Trafford this time last year. The Danish playmaker has been involved in the goals of late and needs to be closely marked by the visitors. Daley Blind is a big loss for this role and Darren Fletcher doesn’t appear to be in van Gaal’s good books so that task could rest on the shoulders of Michael Carrick.

Wayne Rooney vs Ryan Mason
Tottenham’s best defensive midfielder may want to watch the footage of Friday’s game when Newcastle decided to leave Wayne Rooney open for his first half brace. The England captain is scoring from midfield with some clever runs into the box that the opponents aren’t picking up. If neither Mason or Nabil Bentaleb mark Rooney on Sunday you may want to put some money on him to score again.

Prediction: Tottenham Hotspur 1-2 Manchester United
We’re going for a fourth successive Premier League game involving Tottenham that finishes 2-1 but this time for the North London side to be on the losing end. Spurs have a poor record versus the top teams and Manchester United are flying high of late. They win the battle of midfield that results in them winning the game.