Neville believes that United do not need a total overhaul of the squad, rather they need to strengthen in two or three positions only.

United’s performances have drastically improved in recent weeks, as they recorded important victories against Tottenham, Liverpool and Manchester City, and are now firm favourites to qualify for the Champions League next season.

“If you asked me three months ago, I would have said [United] were a long way behind,” Neville said as quoted by The Daily Mirror.

“Two or three months ago, they would have been thinking Chelsea are a long way in front of us. Now the recruitment battle that will happen in the summer becomes critical. If they get that right, United will feel confident they can challenge Chelsea for the title next season.

“I don’t think this summer is a case of United rebuilding or total restructure of the squad. They need to continue to improve in two or three positions: a central defender, a midfielder and a winger.”

Let us analyse the three positions Neville mentioned where United need to strengthen and players the club can buy in the summer.

And from there on, it is all about spreading passes to the attacking midfielders, who are given freedom to run into the channels. A role that very few players in England can execute like Michael Carrick. 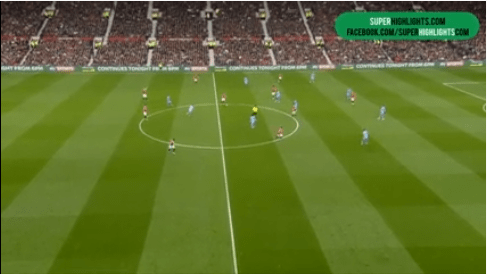 When Carrick gets the ball in the midfield (note his position), he has myriad options in front of him while passing to his teammates. With Fellaini and Mata drifting in pockets, and Valencia hurriedly running to the flanks, Carrick has at least five forward options to pick a perfect pass. In this case, he opts to pass to Rooney, who at at the time of the delivery gets away from his marker, and runs in space leading to a dangerous attack.

The question here is what type of midfielders should United buy in the summer? Do they need another box to box energetic midfielder like Herrera? Or a holding midfielder with a wide range of passing abilities like Carrick? Paul Pogba ideally should fit the bill but will United swallow their pride and dish out £70m for their former player remains to be seen. The French midfielder in only 22 but has grown into a world class talent already. He loves to dribble, he can pass, good at shooting from long distance, puts in a lot of defensive shift – he is a complete package. Another option is Koke.

Cavani has expressed his dissatisfaction from time to time with his role on the wide side and the Uruguayan could be willing to join a top Premier League club that can offer him the lead role again.