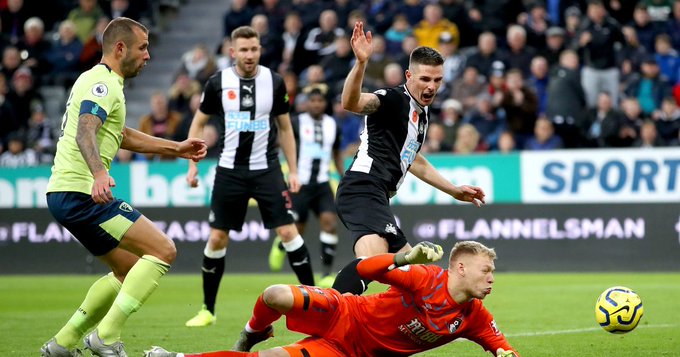 Newcastle United head into the international break on a high note after winning back to back Premier League games for the first time under Steve Bruce.

The confidence was high following their 3-2 win against the Hammers last week, and it reflected on their approach as they came from behind to secure a 2-1 win against AFC Bournemouth on Saturday in the Premier League clash at St James’ Park.

Former Newcastle goalkeeper and club hero Stephen Harper took to social networking site Twitter to express his reaction after the game. He tweeted:

Back to back @premierleague wins for @NUFC 👏🏻👏🏻 pic.twitter.com/rg8SEMlNmX

It was a deserved victory for the Magpies in the end. The Cherries took the lead in the opening 15 minutes through Harry Wilson.

The Welshman, who joined on loan from Liverpool in the summer, finished off a brilliant move involving Ryan Fraser and Joshua King with a superb low shot.

The Magpies restored parity through DeAndre Yedlin just before the break. He converted Allan Saint-Maximin’s deflected strike with a flying header.

In the second half, Ciaran Clark scored once again – his second in as many games – to earn all three points for Steve Bruce’s side.

Newcastle managed only 33% of possession during the game. However, they attempted 20 shots of which they managed to keep nine on target, according to BBC Sport.