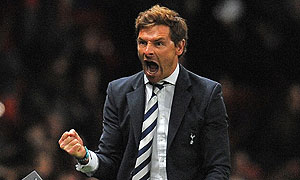 In a manic encounter at Old Trafford Spurs ended 23 years of misery as they beat a disappointing Manchester United 3-2 in an amazing match that veered between great football, terrible defending and questionable defending. It wasn’t the highest quality match, but the low quality made for an amazing spectacle that will in particular give great cheer to Spurs boss Andre Villas-Boas.

Spurs started the stronger and scored only two minutes in to the match. Jan Vertonghen, who’s started very impressively at Tottenham after his summer move from Ajax was the scorer. Powering forward from left back he was fed by Bale, ran past Nani Rafael, accelerated between a far too large gap between centre-halves Ferdinand and Evans and with the aid of an Evans deflection shot past Anders Lindegaard for an early Spurs lead.

With Spurs history at Old Trafford few expected them to hang on to this lead. But after the goal they played excellently, outworking and out-hustling United in shades of Athletic Bilbao’s marvellous display when they beat United on home turf in the Europa League last season. The excellent Dempsey had a good run and shot shortly after Vertonghen’s opener, the ball only just passing Lindegaard’s far post.

United were surprisingly lacklustre, similar to their display at Anfield last week when they relied on Liverpool errors to wangle a win in a game where they were dominated for long periods. They could have had a penalty when William Gallas took Robin Van Persie as well as the ball with a crunching tackle in the penalty area, but aside from that scarcely threatened.

Spurs continued to dominate, giving United’s geriatric midfield no time to settle while always looking to break at speed against the stilted red shirted defence.

They got their reward for this with a second goal on the half hour. The impressive Dembele won the ball powerfully in midfield, slipped the ball to Bale who with the fearlessness he showed against Inter Milan two season ago ran at the United defence, screamed past the unerringly slow Ferdinand, was helped by a superb Defoe dummy run that opened up space and with his weaker right foot sidefooted past Lindegaard into the corner of the net for a table-turning 2-0 lead.

Only then did Alex Ferguson’s team start to play. They started to keep possession better, repel the attacks on the ball from Tottenham’s hassling midfielders and put some pressure on the till-then largely untested Spurs defence.

They got their rewards when the goalscorer Vertonghen pulled down Nani in the box just before half time. It was a dive from Nani but also probably a penalty with the Belgian clearly pulling Nani’s shirt. Chris Foy, Spurs’s bête noire during their defeat away to Stoke last season, waved away the appeals.

Ferguson brought on the back-to-fitness Rooney at half time and was rewarded with a vibrant, far better display from his charges in the second half. They played with a gusto and vigour unseen in the first half.

They were punished for this in the 51st minute, Nani tapping home after a superb low Rooney cross from the right. This was the start of a crazy period of play when three goals were scored in three stunning minutes, where all talk of tactics and strategy went out the metaphorical window.

Nani’s goal was followed by a first goal for Spurs by Clint Dempsey. In Spurs’ only convincing attack of the second half, Defoe robbed the dismal Ferdinand, played a superb pass to the constantly threatening Bale, who ignored the open Dempsey to fire at goal from the edge of the area. Lindegaard parried the shot, but only to Dempsey who with no defender near him calmly sidefooted into the open goal to restore Spurs’ two goal lead.

Again from the kick-off, another goal was scored. United went forward from the centre circle, Van Persie sent through a gorgeous pass bypassing four or five Tottenham defenders running forward to try and catch United offside from the edge of the D to Kagawa, who with an excellent touch then sidefooted home past Brad Friedel off the post. 3-2 Tottenham with almost fourty minutes to go.

More goals seemed likely, and United were the only side looking like scoring them. On the hour there was a big shout for a penalty as the defensively fallible Kyle Walker brought down the tricky Kagawa in the area. He got some of the ball but he got more of the man and many a referee at Old Trafford with United losing would have given it. Foy again said no.

More goals very nearly came to United. Rooney hit the post with a superb curling free kick from 25 yards out, shortly followed by a Van Persie goal rightfully ruled out for offside. At this stage in the game, with United rampant and Spurs history of blowing leads, an equaliser if not outright victory for Ferguson’s men seemed inevitable.

Another penalty shout followed, Sandro having the ball hit his outstretched arm in near his goal. Again it probably wasn’t deliberate but Spurs were still fortunate that it wasn’t given. With the history of referring decisions going against them in encounters at Old Trafford, Spurs fans will consider that belated justice.

United still attacked, Van Persie missing a golden opportunity after an exquisite Carrick pass left him ten yards out with the goal at his mercy. A few minutes later a diving header from another Carrick assist went wide from twelve yards.

By now there were 15 minutes left, and perhaps surprisingly United started to struggle to create clear cut chances. Spurs by now had forgotten about attack and were ensconced in their penalty area, throwing limbs desperately at the ball as they sought to protect their tenuous lead.

Despite this primitive approach they did a pretty good job of tackling, blocking and punting the ball away from danger for a few seconds of respite with the exception of Carrick in the 84th minute. Reversing his earlier chance Van Persie crossed deliciously for Carrick, who headed onto the bar as Spurs breathed an enormous sigh of relief.

The rest of the match saw United put on more and more strikers and Spurs bring on more defenders. This culminated in plenty of pressure but no real chances, Spurs booting the ball away with regularity in a display almost laughably similar to England’s performance against Italy in the Euro 2012 quarter-final.

The final whistle came and went in a flurry of Villas-Boas air punches. He has been pilloried by the press, woke up to a story in The Sun saying that the players were unhappy with his management and has had to deal with a press pack in love with his predecessor but not with him.

On this mild Saturday evening in Manchester, with Spurs fans as stunned as they were delighted at their victory travelled back down south, boy did he find the best way possible to silence his critics.