A big clash at St Mary’s completes the Premier League action this weekend as Southampton host Liverpool in a match that has big implications on the top four.

Southampton start the weekend one point ahead of Arsenal as the team in the final UEFA Champions League places, four points ahead of Liverpool who are seventh.

Liverpool are unbeaten in their last nine Premier League games and have kept four successive clean sheets on the road in collecting 10 points since they lost at Old Trafford back in mid-December.

Toby Alderweireld has been out since mid-January with a hamstring injury and doesn’t appear to be fit to make his return for this one. Ronald Koeman has also lost Ryan Bertrand through suspension for this game.

Up front, Emmanuel Mayuka has missed most of the season, whilst Jay Rodriguez has missed all of the season so far. Shane Long could return this weekend from a rib injury that has kept him out since mid-January.

Brad Jones’ thigh injury keeps him on the sidelines but Simon Mignolet appears to have won the number one role back anyway.

A foot injury may keep Raheem Sterling out of this one and Steven Gerrard appears to be ruled out with a hamstring injury picked up in the 3-2 win over Tottenham more than a week ago. A groin injury will keep Lucas out.

Mario Balotelli scored from the penalty spot to give Liverpool a 1-0 lead in the first leg of their UEFA Europa League tie versus Beşiktaş. 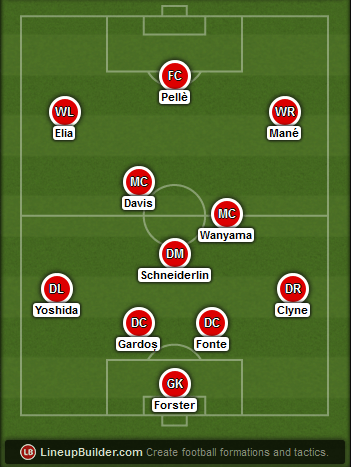 Southampton have managed clean sheets in their last two games, against Queens Park Rangers and West Ham. Florin Gardoș and Maya Yoshida look set to play because of an injury to Alderweireld and suspension to Bertrand that could disrupt things. They will be protected well by Morgan Schneiderlin and Victor Wanyama in the middle but Liverpool’s threats will likely come from out wide. Sadio Mané is in good form and Eljero Elia could keep Dušan Tadić out of the team once again. 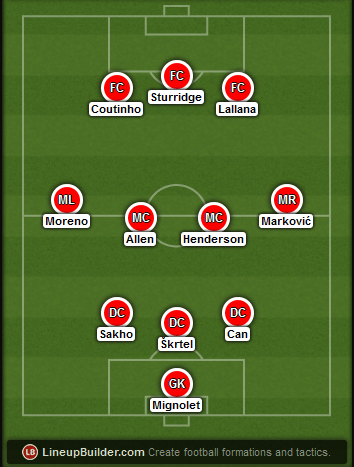 A few disruptions in midfield for Brendan Rodgers should see Jordan Henderson and Joe Allen partner in the middle with Lazar Marković as the right wingback once again. Daniel Sturridge will be the central striker, flanked by Philippe Coutinho, and is likely Adam Lallana will face his former side with Raheem Sterling a doubt.

Adam Lallana vs Maya Yoshida
We can expect Liverpool’s right winger to have a go at Southampton’s makeshift left-back in this game. The two should know each other well having played alongside each other last season. Adam Lallana’s movement around the pitch is a big threat but Morgan Schneiderlin will be aware of it to help out. The Liverpool forward has been good at taking on defenders and creating chances from the flank this season.

Daniel Sturridge vs Florin Gardoș
Southampton will need a gameplan for the lethal Daniel Sturridge. His pace and eye for goal make him a threat in every game. Ronald Koeman will be looking for his side to cut off the supply to the Liverpool striker but with playmakers either side of them they’re likely to need either of the two centre-backs to keep tight to him to prevent any clear sights on goal.

Sadio Mané vs Mamadou Sakho
Whomever plays down the right for Southampton should be looking to exploit Mamadou Sakho who isn’t the most positionally sound defender and looks like he has a couple of errors in him. Alberto Moreno hasn’t always been the best at helping out defensively either so there’s a chance for the home side to exploit Liverpool here. Sadio Mané has been lively and could be the man to do that. He’s got a decent shot on him too should he get himself into goalscoring positions.

Prediction: Southampton 1-1 Liverpool
It’s hard to call a winner here. Southampton have been tactically sound this season and despite absentees in their defence they are still playing well at the back. The goals have not been so easy to come by of late and Liverpool are keeping it tight at the back. We’re expecting a close match on Sunday and are sitting on the fence with this one.