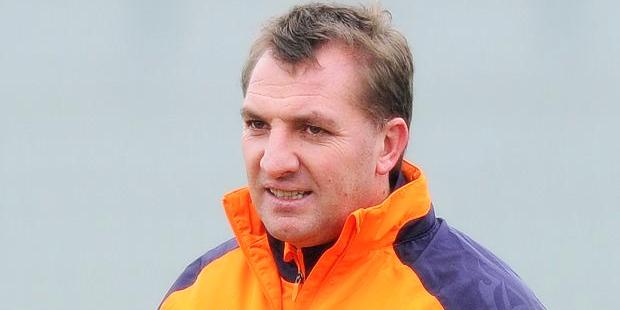 Brendan Rodgers divides opinion among the pundits, neutrals and Liverpool football fans as well. He is a very likeable person in the footballing fraternity in England but not all are convinced with his work at Liverpool.

To be fair to his critics, they have every right to doubt him. What has he achieved? Is there any progress in truest sense? Many even get annoyed with his constant reference to philosophy, while others think these are nothing but his moral precept and self-constructed myth.

Rodgers feels that his methods are working and his team is adapting to his philosophy. Obviously, there are disappointments too, but the way the Reds have performed in the second half of the season gives a strong feel that he is the right man to steer the club to the place they Liverpool belong to.

There is a crap myth among many people (includes pundits as well) that Rodgers is trying to bring Barcelona’s style of tiki-taka at Liverpool.

Anybody who has watched Liverpool this season for a considerable amount of matches must have observed that the Anfield club doesn’t try to play tiki-taka. Pass and move was always the Liverpool Way, but Rodgers has added something more to that. He is trying to develop an identity in terms of playing style in the squad.

Every team has its own style of playing football that gives them their identity. Even Stoke City have their own brand of playing, which many critics brand as rugby football. Liverpool swayed from one extreme under Rafael Benitez’s European style to Roy Hodgson’s antediluvian British boring styles: the club searched for an identity.

At least Rodgers is trying to sculpt his team according to his taste. The results have been inconsistent but one has to understand this is his very first season at the club and he needs time to work his way out.

Rodgers has done brilliantly with the players he has bought and with the existing squad as well. Liverpool tried to bring one striker in the summer only, but none of their deals materialized then.

Luis Suarez did his best for the club this season, but his wastefulness in front of goals still remained, though the Uruguayan has improved (28 goals) on the finishing aspect a lot.

The club suffered as a result. The performances were good in most of the games but there was very little end products and the blame fell on Rodgers. In January, he bought two new attackers (Philippe Coutinho and Daniel Sturridge) and the results are there for all us to see.

Liverpool have scored 53 goals in 28 games this season and this record is their second best at this stage of a Premier League season.

This is yet another area that needs to be highlighted. The way he managed to get the best out of Stewart Downing, Jordan Henderson and Jose Enrique are testimony of his man management credentials.

He publicly chose to criticize Downing, even telling him to find another club in January. The former Aston Villa winger took it to his chin, worked hard and now has established himself as regular starter, only on his merit.

Likewise, Enrique was out of form and Rodgers played him on left wing to get his confidence back. Likewise Henderson, who didn’t want to join Fulham as a part of Dempsey deal, is proving his worth to his manager finally.

It was evident that several academy stars would feature for the club when Rodgers took charge of Liverpool last summer. He has worked before with academy kids at Chelsea and if anyone who could harness Liverpool’s vast wealth of academy talent, it was him.

Raheem Sterling, Suso and Andre Wisdom, three promising academy players have shown their mettle and proved that they are ready to do the job whenever needed.

Rodgers could have easily put pressure on the owners by asking to support him with funds when he found his first team needs huge development after first few matches. Instead, he chose to work with academy players and most importantly kept faith in them.

Credit must go to Rafael Benitez, who revamped Liverpool’s academy completely and Rodgers is now reaping its benefit. Still, he had to use it in the best possible way and he did exactly that.

These are slow but steady improvements. Rodgers insisted that he needs a few more transfer windows to get his methods working to perfection. The only thing (he addressed that too) that has hampered the progress of Liverpool this season is individual errors have cost many precious points.

This is something he cannot change overnight. He needs more time and financial backing as well.

Performance and rather strong performance against all the good teams has been the biggest takeaway for Liverpool. Results are also starting to improve. He is laying a strong foundation at Liverpool and with time it could pay rich dividends.