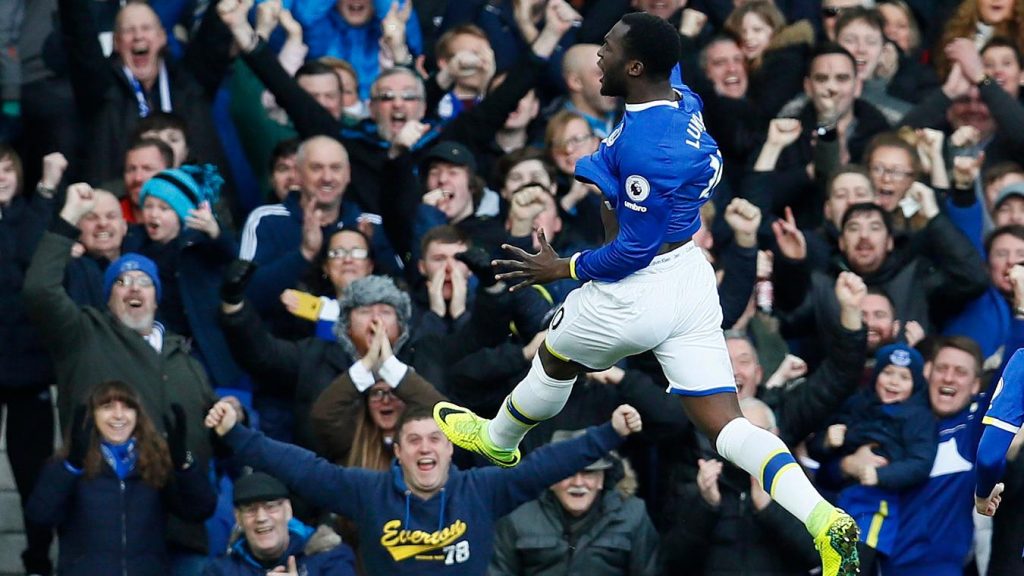 Harry Kane is rising through the rankings rapidly, and the league is taking notice. These past two matchdays have been quiet for those in the Premier League’s “Most Valuable Offensive Player” (MVOP) rankings. In fact, the top 15, excluding Kane, Kevin de Bruyne and Romelu Lukaku, earned a total of 3 out of the 50 points (6%) distributed over the past two matchdays. That’s significantly low for a group that has essentially carried their teams the entire season.

The aforementioned 3 players on the other hand have earn a total of 5.82 points over the same period. As a result, all three rose in the rankings. We will breakdown what this recent success entails for all 3 players for the remainder of the season. 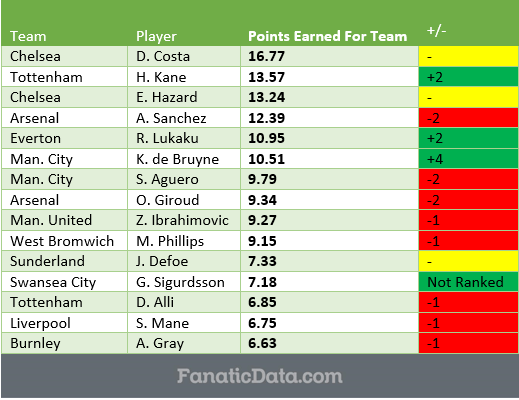 As we previously predicted, Harry Kane is right on schedule in terms of performance. The second half of last season was a fruitful period for Kane, so we expected a similar run this season. Luckily for him, Tottenham is the hottest team in the Premier League over the past 9 matchdays.

Tottenham has earned 23 points in the last 9 matches and Kane has been awarded with 24% of those points (5.61). While Kane is inching closer to the top spot held by Diego Costa for the past 8 matchdays, he will need to boost his performance further if he hopes to reach the top by season’s end.

Besides Manchester United, the remaining opponents for Tottenham allow an average of more than one goal per game. This means there will be plenty of points to be earned by Tottenham assuming its defense remains stout. And Kane will have his chances to overcome Costa.

Kevin de Bruyne was leading the MVOP rankings at one point during the early part of the season. He has shown time and time again that he can be Manchester City‘s offensive leader. Unfortunately for de Bruyne, he received an injury early in the season just when his and his team’s performance was peaking. Only now are both beginning to come back to form.

It will be interesting to see how Man. City performs for the remaining matchdays. They have been inconsistent all season. Though, the introduction of 19 year-old striker Gabriel Jesus seems to have brought new life to the team. If Jesus continues to perform at the current level, he will need someone servicing him balls. Kevin de Bruyne will be the likeliest candidate to do just that.

Romelu Lukaku has been less fortunate compared to Kane and Costa (the two strikers ahead of him in the MVOP rankings). 25% of his goals scored have been in matches in which Everton failed to come out victorious. That is higher than Costa’s 20% and Kane’s 7%.

Despite this, Lukaku still has an outside chance of reaching the top. His team is currently riding a 7 game unbeaten streak, and Lukaku has earned 4.38 points during this span. Although unlikely, if Everton keeps this pace up, then Lukaku might unexpectedly reach the top.

We determined the Most Valuable Starting Squad through Matchday 24 utilizing the most commonly used formation in the Premier League: 4-2-3-1 (excluding goalies). 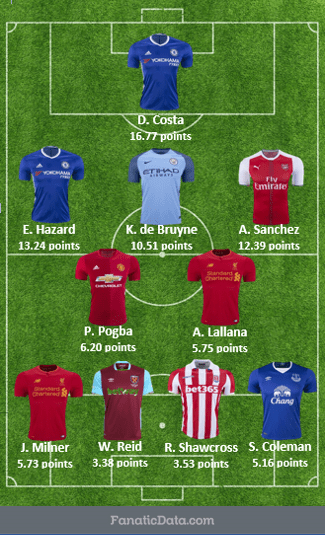 The Most Valuable Starting Squad continues to remain steady. Compared to the previous starting squad, there was only one change. Stoke City centre-back Ryan Shawcross entered the Starting Squad for the first time this season.

Continue following us to see the latest rankings and starting squad after Matchday 26.