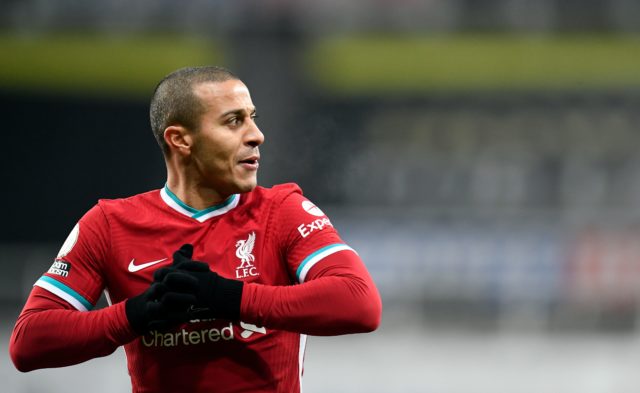 Liverpool managed a 0-0 draw against Newcastle United at St James’ Park on Wednesday night and remained as league leaders at the end of the year.

Thiago made his long-awaited return from injury against the Magpies, and instantly gave the impression of a player who is a class apart from the rest.

The Spaniard, who joined in the summer transfer window from Bayern Munich, has only managed one and a half games for the club so far, with injuries restricting his game time.

He has now made a comeback from injury, and it looks like a new signing for the Reds. The former Barcelona midfielder is a world-class player, and Liverpool fans will hope that he plays a vital role in the second half of the season as the Reds aim to retain their Premiership title.

Owen was full of praise for the midfielder. He told Premier League productions:

“Yeah, it’s just the way he plays. It’s so exciting to watch. He is just different to so many players.

“He doesn’t need to say a word when he is on the pitch. His passes tell everything you need to know. When it’s coming to you, that ball is telling you there’s a man on or give it me back or run into the space.. he actually plays the ball with the type of spin, with the type of pace, it’s just unbelievable.”

The Reds boss Jurgen Klopp also sounded confident that Thiago will soon be back to full speed.

Liverpool now have managed just one away win in seven in the league, and it has allowed Manchester United a chance to close the gap at the top to three points, with a game in hand.