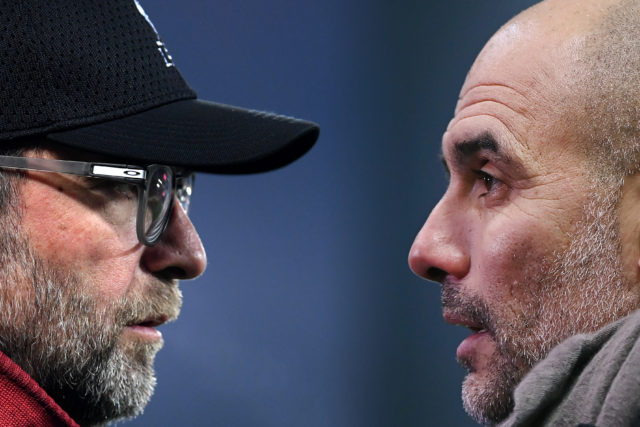 Liverpool’s Premier League title defence will be severely tested this weekend as the Reds take on Manchester City at Anfield on Sunday.

Pep Guardiola’s side are in red-hot form at the moment, managing 13 wins in a row in all competitions. Liverpool, on the other hand, are stuttering in the league, with their recent results being very inconsistent.

Former great Liverpool defender turned popular football pundit Mark Lawrenson has predicted a draw for this one – a result that will bode well with the visitors who are seven points ahead of their opponents with a game in hand.

For Liverpool – it is do-or-die. Jurgen Klopp’s men have to win this game to hang in the race for another week. A defeat would surely end all their hopes.

Lawrenson feels that despite City’s impressive run of form, it’s hard to see the Reds losing three games in a row at Anfield where they registered an unbeaten run of 68 games under Klopp.

However, the popular BBC pundit is worried about Liverpool’s inconsistency. He has predicted a 1-1 draw. Given Liverpool’s lack of consistency, even if they win this game there is little reason to be optimistic about their title hopes.

“Manchester City last won at Anfield in 2003, and since then they have lost 13 out of 19 games there in all competitions,” said Lawrenson to BBC Sport.

“Sunday is obviously a great chance for City to end that poor run, but it is Liverpool who need the points more because they have slipped off the pace at the top of the table.

“I don’t think either side will go all-out to win it, though. I’m expecting it to be a bit cagier than that.

“What worries me more about Liverpool is their inconsistency. They had a couple of poor results at the start of the year, before winning comfortably at Tottenham and West Ham.

“I thought they had turned the corner and were looking their usual selves, then came this week’s defeat and poor performance against Brighton. That was a more perplexing result than when they lost at home to Burnley, and they can’t afford to play like that again against City.”

The Reds have struggled with injuries, but the problem runs much deeper than that. Just when they give the impression that they have turned the corner, it is followed by a series of poor results. It has happened more than once this season.

In recent years, Liverpool have registered some big margin wins against City at Anfield, and probably they can draw confidence and inspiration from their previous wins.

On paper, City stand out as favourites, but with the likes of Sadio Mane, Alisson and Fabinho set to return, and new signing Ozan Kabak likely to feature as well, the Reds will be well equipped to deliver their best on Sunday.