The second Manchester derby of the season sees United heading into this weekend’s match in much the better form than the defending Premier League champions.

Louis van Gaal’s side have won five straight and eight of their last 10 in the league, whilst Manchester City have lost three of their last four in all competitions. The Red Devils also start the weekend ahead of their noisy neighbours.

Victory for the home side this weekend would see come close to securing a top four finish whilst putting their heavily-invested rivals in some doubt over qualifying for next season’s UEFA Champions League themselves.

Chris Smalling still remains a doubt after picking up an illness in Italy more than a week ago. Phil Jones and Marcos Rojo played in the middle of the United defence in beating Aston Villa 3-1 last weekend. Jonny Evans is still suspended.

Robin van Persie is the only other absentee for the Dutch manager – Wayne Rooney has been playing as a sole striker in his absence.

Manuel Pellegrini doesn’t have too many problems with absentees, except that a lot of his players appear to have been on holiday in their minds in recent weeks. The Chilean manager has a full squad to pick from to face their local rivals. 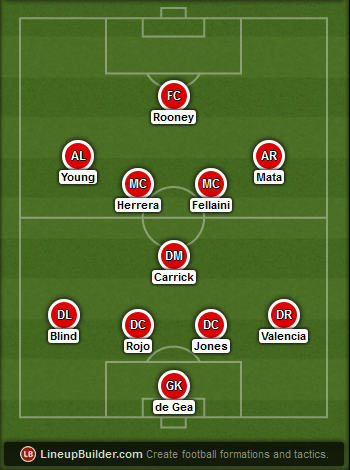 Louis van Gaal has a largely settled side now who are on a good streak. Antonio Valencia is a weak point at right-back and Juan Mata isn’t the best defensive midfielder on that side either. Marouane Fellaini versus Yaya Touré should be a good physical battle in midfield. The Belgian’s forward runs could occupy Vincent Kompany to potentially give Wayne Rooney some freedom in and around the penalty area. 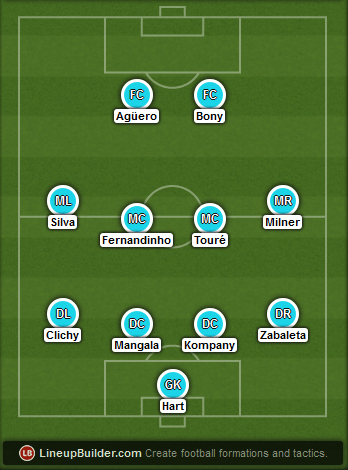 Not a great deal of surprises in the Manchester City lineup either. Samir Nasri was on the bench on Monday night and we think he’ll remain there with James Milner starting on the right – Jesús Navas is pretty unproductive out there but potentially his pace versus Daley Blind could be a threat. Sergio Agüero has gone eight and a half hours without a goal in all competitions, could be partnered with Wilfried Bony this weekend as Edin Džeko failed to make an impact once again on Monday.

Wayne Rooney vs Eliaquim Mangala
The Manchester City defence has been poor by their standards this season and big summer signing Eliaquim Mangala has been a big part of that when he plays. Wayne Rooney has been in good form recently and we wouldn’t be surprised to see the United captain get the better of the French centre-back and get himself amongst the goalscorers as he often does in this fixture.

David Silva vs Antonio Valencia
Although Manchester City are in poor form we cannot ignore this favourable match up for the visitors. David Silva doesn’t have too many assists to his name this season but he’s certainly getting on the scoresheet. The Spaniard’s quick feet and intelligence should be a real threat for Manchester United’s right winger-come-right-back who has been caught out on a number of occasions this season.

Juan Mata vs Gaël Clichy
Juan Mata has put in some fine performances when given the opportunity of late. The Spanish playmaker certainly has the ability to be the difference maker here, drifting between the Manchester City midfield and defence where we expect him and his teammates to find space. In doing so, he certainly has the ability to create chances for both teammates and himself. Down the wing City’s left-back at least has the pace to keep up with Mata and get back in possession but he’ll need to be careful of the left-footer drifting in midfield.

3 – Manchester City have lost each of their last three Premier League away games – at Liverpool, Burnley and Crystal Palace.

4 – Manchester City are on a four-game winning streak in the Premier League versus the Red Devils.

5 – Manchester United are currently on a five-game winning streak in the Premier League, scoring 11 goals during this run and conceding only two.