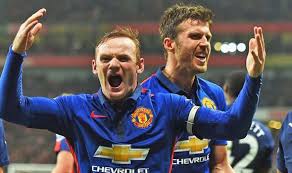 Manchester United have been handed a massive boost as their captain Wayne Rooney is expected to be fit to face Everton.

Club football returns after two weeks of international break later this weekend. The former Toffees striker was included in the England squad by manager Roy Hodgson for the European qualifiers against Estonia and Lithuania.

The Three Lions won 2-0 against Estonia at the Wembley Stadium and will face Lithuania on Monday evening in the final fixture of the Euro 2016 qualifiers. Even before the clash against Estonia, Rooney was ruled out for both the matches due to an ankle injury.

Louis van Gaal will take his men to Goodison Park as the Red Devils take on Everton on Saturday. Sky Sports believes United star should return to face his former club later this weekend.

The England international has not traveled with the squad and stayed back in England. He has struggled to find the back of the net in the Premier League. However, his leadership qualities could be vital for United and Van Gaal against Everton.

In addition to this, United face CSKA Moscow in the Champions League clash after which they host Manchester City in the Premier League clash next weekend. Rooney’s return to fitness will only give the Dutchman more options.

Rooney was not the only player to have suffered injury. The midfield duo of Bastian Schweinsteiger and Michael Carrick also picked up injuries while on international duty with Germany and England respectively.

The Three Lions manager confirmed that both Rooney and Carrick are expected to be fit to face Everton, reports the Liverpool Echo.

“From his point of view, and United’s, the rest will do him good. I fully expect to see him and Wayne Rooney fit for United and Louis van Gaal next weekend,” Hodgson said.