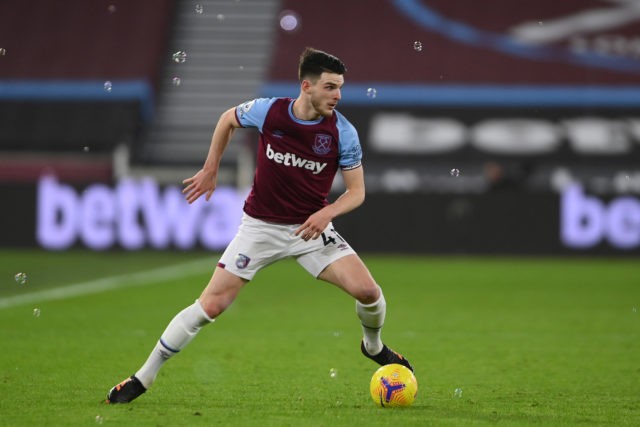 Manchester United could propose to sign West Ham United midfielder Declan Rice in a player-plus-cash deal with Jesse Lingard moving in the opposite direction, The Athletic reports.

The Red Devils could be lining up a new midfielder this summer with Nemanja Matic no longer at the prime of his career at 33, while Paul Pogba’s future remains uncertain with his contract expiring in 14 months.

Rice has proved to be one of the league’s leading midfielders this term, managing two tackles and two interceptions per game with an impressive pass success rate of nearly 88.

He was on the radar of Chelsea last summer, but a deal never materialised. However, he could switch to United this year in a proposal that may tempt the Hammers.

Lingard has been a huge success for the Hammers since joining them on loan in January, registering six goals and four assists from just eight league meetings.

David Moyes’ side are looking at the prospect of making the move permanent, which could boost United’s chances of landing Rice in a part-exchange deal.

The Hammers are reportedly said to value Rice at over £100 million, which is a figure United are unlikely to match as they are planning other key signings.

However, they could use Lingard as a makeweight to lower the price tag to an affordable margin. The Red Devils are reportedly said to value Lingard at around £30m.

The Hammers are still in a strong position to keep hold of Rice with his contract not expiring until June 2024, with the option for another 12 months.

It will be interesting to see how this transfer story develops in the coming months.