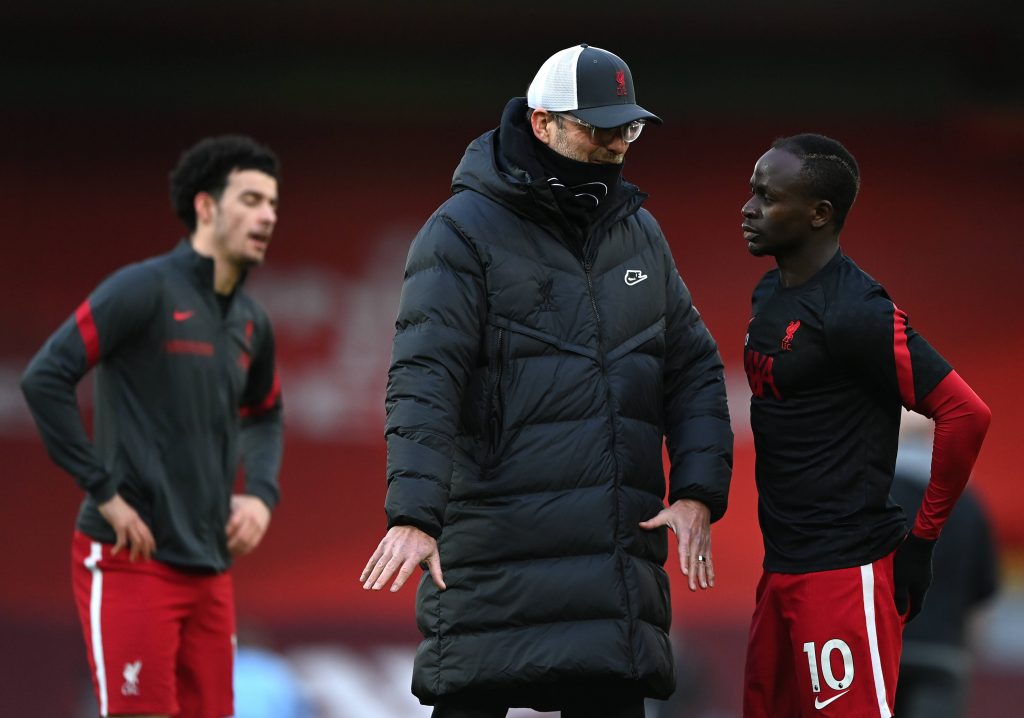 Jurgen Klopp has admitted he will talk to Liverpool forward Sadio Mane after he refused to shake his hand following the win against Manchester United.

The Reds took on United in their rescheduled clash on Thursday evening, with Liverpool coming away with all three points after a 4-2 win.

Bruno Fernandes scored the first goal of the game before Diogo Jota equalised in the 34th minute.

Roberto Firmino then scored either side of half-time before Marcus Rashford got one back for Manchester United in the 68th minute.

Mohamed Salah then made sure of all three points with a 90th-minute goal.

Despite Liverpool’s impressive performance, one of the biggest talking points after the game was Mane’s refusal to shake Klopp’s hand.

Mane started the game on the bench and was introduced in the 74th minute when Liverpool were leading 3-2.

Following the full-time whistle, Mane was seen snubbing a handshake from Klopp.

The Liverpool boss has now explained why Mane snubbed him and revealed he will have clear-the-air talks with the player.

“If somebody shows me respect five million times and one time not, what is then more important?” Klopp said, as quoted by the Guardian.

“The world is in a situation when you make this one time bigger than necessary. That’s unfortunately the case,”

“I hope for you that your boss if you one time don’t show him respect, he then does not forget all the other stuff.

“I am completely relaxed about it. If you had seen me as a player, what I did out of emotion was insane – and I’m a completely normal guy.

“But it happened to me. We will talk about it, and then it will be sorted. Everything will be fine. That’s all.”

While Mane’s frustration would not have been a welcome sight for Liverpool fans at full-time, it is likely to be nothing to worry about.

The forward is enduring a difficult campaign, which has largely contributed to Liverpool’s less than impressive points tally.

As a result, there is always going to be some frustration. With Klopp admitting he did not explain to Mane why he was starting on the bench, you can see why he was not too happy.

Following talks between manager and player this week, we will likely see Mane return to the starting line-up when Liverpool face West Brom on Sunday.