Liverpool are looking to rebound from their UEFA Champions League defeat in Switzerland on Wednesday by beating West Bromwich Albion at Anfield this weekend.

The Reds did not win any of their three Premier League games in September, all since losing Daniel Sturridge to injury. There is a chance the England international could return to face West Brom. Sturridge has been left out of the England squad for their two upcoming qualifiers after Rodgers and England manager Roy Hodgson made an agreement.

West Brom thrashed Burnley 4-0 last weekend to make it back-to-back wins for Alan Irvine’s side after picking up only two points from their first four.

Daniel Sturridge could return but defenders Mamadou Sakho and Glen Johnson are both absent with thigh injuries. Joe Allen and Jon Flanagan are out with knee injuries. Emre Can and Suso are longer term absentees.

Andre Wisdom is ineligible to play against his parent club. Strikers Brown Ideye and Victor Anichebe are both out for a couple of weeks, as is forward Silvestre Varela. Left-back Sébastien Pocognoli is a doubt. 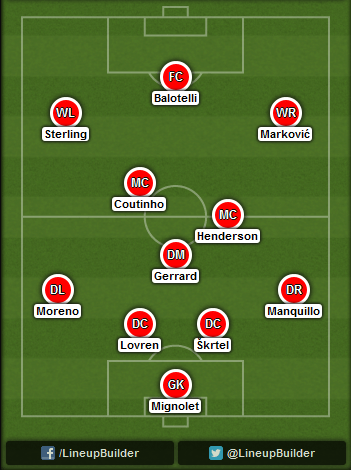 Assuming Daniel Sturridge does not return to the starting lineup we think Brendan Rodgers will stick with 10 of the players whom started at FC Basel. Alberto Moreno for José Enrique is the only change we’re going for with the latter perhaps not ready to play twice a week and with Moreno being the regular first choice left-back of late. 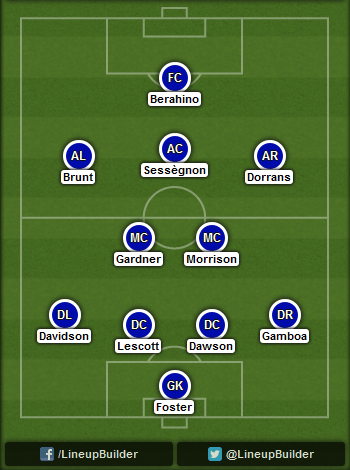 Two changes at left-back for West Brom. Jason Davidson has played there once this season in the only game Sébastien Pocognoli has previously missed this season. Christian Gamboa is a straight swap for the ineligible Andre Wisdom.

Raheem Sterling vs Cristian Gamboa
Liverpool’s biggest threat in Daniel Sturridge’s absence has been Raheem Sterling. If the England youngster starts on the left then you can expect him to give the Costa Rica World Cup star troubles down that side. If he starts on the right, then Jason Davidson is in for a tough game. Sterling is pacey, loves running at defenders and is a goal threat. Expect that to be no different this weekend, although the West Brom defence hasn’t allowed too many goals in the opening games. Alan Irvine has got some organisation about the side.

Jordan Henderson vs Craig Gardner
Potentially an interesting battle in the centre of midfield. Both Jordan Henderson and Craig Gardner are capable of being amongst the goals. The Liverpool midfielder is heavily involved in the tempo and building up Liverpool’s attacks, whilst Gardner is a player capable of stopping them, either by tackling or fouling the opposition.

Saido Berahino vs Dejan Lovren
West Brom’s top scorer is only one goal behind matching last season’s tally and we’re only six games into the season. Liverpool’s summer signing has looked vulnerable to life at Anfield since arriving from Southampton. The Croatian has looked susceptible to players running directly at him and Saido Berahino can do exactly that.

Prediction: Liverpool 2-1 West Brom
Liverpool to win a game? Yes, West Brom are organised but we think Liverpool are going to win a game sooner or later without Daniel Sturridge and the pace they have in attack this may just be the one. Mario Balotelli is getting his deserved criticism now and maybe he’ll have read it and be determined to hit back. The Reds have some goalscorers and playmakers in that midfield to cause West Brom havoc so we’ll go with a home win.