Liverpool will be aiming for a third-successive Premier League victory when they host Sunderland at Anfield on Saturday.

The Reds beat Stoke City (1-0) and Leicester City (3-1) over the past week to move them up to eight position in the table before this weekend’s fixtures.

Sunderland picked up a respectable 0-0 draw at home to Chelsea last weekend before being thumped 4-1 by Manchester City at the Stadium of Light on Wednesday. They head into matchday 15 two points above the relegation zone.

Mamadou Sakho has still not recovered from a thigh injury picked up in September. Jon Flanagan is a long-term casualty. Kolo Touré has started the last two games alongside Martin Škrtel, at the expense of £20 million summer signing Dejan Lorven.

Mario Balotelli has been out since the start of November with a groin injury, whilst fellow striker Daniel Sturridge is still sidelined. Rickie Lambert has started the last three Premier League games, but not scored since the second minute against Crystal Palace in the first of those three games.

Gus Poyet’s side are winless in four games and are still without left-back Patrick van Aanholt whose dislocated shoulder is expected to keep him out until at least February. Anthony Réveillère has started the last four at left-back.

Billy Jones has been injured for the majority of his time since joining from West Brom in the summer. The right-back has made just two Premier League appearances for the Black Cats.

Adam Johnson missed the midweek defeat to Manchester City with a knock but should return to action this weekend. Emanuele Giaccherini has been out since September and won’t make his return versus Liverpool. 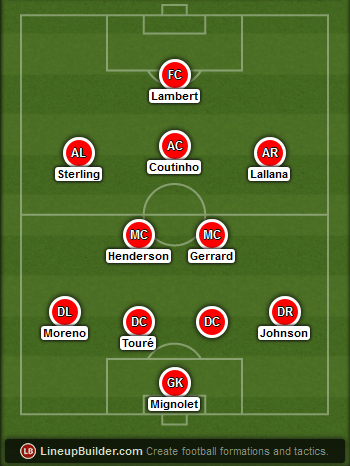 Liverpool’s midfield were the match winners midweek with goals from Adam Lallana, Steven Gerrard and Jordan Henderson. Manchester City pulled this Sunderland midfield and defence open midweek and whilst Liverpool aren’t quite as good as the defending champions, they have the players to do enough damage to the visitors to get the victory. Perhaps Rickie Lambert isn’t the best striker to run at the defence, but if they can get Raheem Sterling running at the centre backs they’ll be in luck. 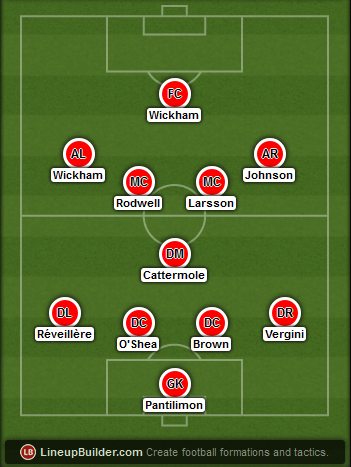 Adam Johnson should be back to take the right wing spot back with Connor Wickham moving back to the left. We’ve gone with Wes Brown to come back into the the Sunderland defence alongside John O’Shea.

Raheem Sterling vs Santiago Vergini
Raheem Sterling set up one of Liverpool’s three goals versus Leicester City on Tuesday night. The England international trying to get back into form having failed to score in his last nine Premier League games after starting the season with three in five. The Sunderland defence has not been too good all season and should cause the Argentine full-backs some problems, whilst if he cuts inside, Sterling certainly has the pace advantage over Wes Brown and John O’Shea.

Adam Lallana vs Anthony Réveillère
Adam Lallana scored a goal against Leicester City after lining up on the right wing, up against the ageing Paul Konchesky. Anthony Réveillère is 35-years old and a right-back by trade so Liverpool should expect some success from one of their big summer signings. Lallana is a tricky customer with an eye for goal and creating opportunities so Réveillère can expect to be in for a long day.

Steven Gerrard vs Lee Cattermole
Steven Gerrard scored from open play midweek and should be a goalscoring threat once again this weekend. Sunderland have Lee Cattermole and Jack Rodwell protecting their back four, so you can at least expect the Liverpool captain to win some free kicks. The home side should be looking for their skipper to spray balls down the wings and provide crosses for target man Rickie Lambert.

Prediction: Liverpool 2-0 Sunderland
Liverpool appear to have found some sort of form whilst Sunderland haven’t been too potent infront of goal of late. Four games without a win, a thrashing midweek – Liverpool are capable of taking advantage of crestfallen opponents.