Liverpool return to Premier League action on Saturday, three days after being taught a footballing lesson by Real Madrid at Anfield.

Brendan Rodgers will see this as a more realistic opportunity to pick up three points even if Hull City did pick up a point at Arsenal last weekend.

Neither defence is popular with fantasy football players so far this season – each with just one in their opening eight games.

Daniel Sturridge and Jon Flanagan are likely to be the only injury worries to Brendan Rodgers as Mamadou Sakho may be available following a short spell on the sidelines.

Both Michael Dawson and Nikica Jelavić could be out for up to six weeks which will come as a huge blow for Steve Bruce. The Tigers are already without goalkeepers Allan McGregor and Steve Harper and midfielder Robert Snodgrass. 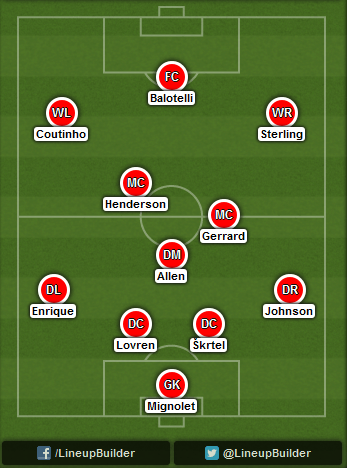 Unless anyone is too tired from Wednesday’s match in the Champions League, we’ve only made one change from that starting lineup – José Enrique in for Alberto Moreno at left-back. Don’t be surprised if Adam Lallana starts though. Will Brendan Rodgers be brave enough to stick Rickie Lambert in ahead of the ineffective Mario Balotelli? 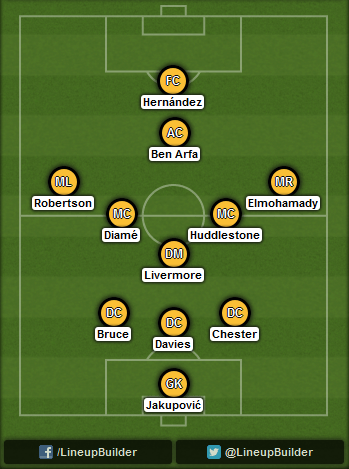 Hull City line up in a 3-5-1-1 formation with wing backs. Alex Bruce in for Michael Dawson in defence. Potentially Tom Ince or Gastón Ramírez could start ahead of Hatem Ben Arfa but this is the lineup we think Steve Bruce will select.

Raheem Sterling vs Tom Robertson
Alexis Sánchez caused Tom Robertson and the Hull City defence a lot of problems last weekend and we think Raheem Sterling can do similar here if he plays out on the right wing. Michael Dawson is missing from the left centre-back spot too so Alex Bruce will be in there. Glen Johnson also bombs on from right-back to add an extra attacking threat down that side. We certainly feel this will be Liverpool’s strongest point of attack on Saturday.

Jordan Henderson vs Jake Livermore
Jordan Henderson has had a couple of quiet games of late and whilst Hull City do play three central midfielders, the England international can look to spread the ball out to either wing and look to pull Hull City players out of position in the process.

Abel Hernández vs Dejan Lovren
Liverpool have kept only one clean sheet in their last 14 Premier League matches so Hull City must feel confident of getting on the scoresheet in this one. The Reds’ defence haven’t improved on last season even with £20 million man Dejan Lovren. Hull City like to play counter attack football and some opportunities should arise for them in this match. Watch out for the pace of their Uruguayan striker Abel Hernández to cause the Liverpool defence problems.

Prediction: Liverpool 2-1 Hull City
Liverpool may be coming off a morale-destroying hammering at the hands of Real Madrid midweek but we think they will bounce back with three points on Saturday. Hull City took advantage of a beaten up Arsenal last weekend but they have a couple injury problems of their own now. We’d be more confident in the home side if Mario Balotelli was benched but we think they’re good enough to win regardless.