To borrow the slightly derisory words of Liverpool manager Roy Hodgson, Tottenham are a ‘top side’ and no longer the ‘mugs’ that they once were, with a bounding start to the season already seeing them dispatch of reigning European champions Inter, bitter local rivals Arsenal and (most consumately of all) Champions League also-rans Werder Bremen with their patented brand of gung-ho bombardiering.

Their recent run of rollicking form has seen them prematurely cast as outside pretenders to the Premier League throne, however a peppering of woefully limp performances earlier in the season are enough to suggest that Harry Redknapp‘s side haven’t crossed that particular threshold quite yet.

Liverpool’s fluctuating fortunes this campaign have been well documented, but since NESV’s takeover the waters have been relatively calmer, though a string of middling performances have meant that the omnipresent pressure on Hodgson and his charges is yet to begin dissipating at Anfield.

Will another sycophantic pre-game assessment of his opponents be seen as yet more submissive kow-towing on Hodgon’s part, a precursary excuse, or merely an affable statement of respect?

Supporters of the red-hued Scouse persuasion are finding it increasingly hard to accept that it may be the latter.

Spurs will be bidding to win their third Premier League game in a row since March, following their impressive victories over Blackburn and Arsenal during the last fortnight.

That said, after recouping 13 points from their last six fixtures, a two-goal winning margin on Sunday would see Liverpool rise above their opponents in the table – presumably making them the genuine left-field contenders to pip Manchester United, Arsenal and Chelsea to the title.

However when you factor in that Spurs have scored 16 goals in six games this month (including 10 in their last three), it looks like Liverpool may need to work miracles in front of goal in order to achieve that feat. 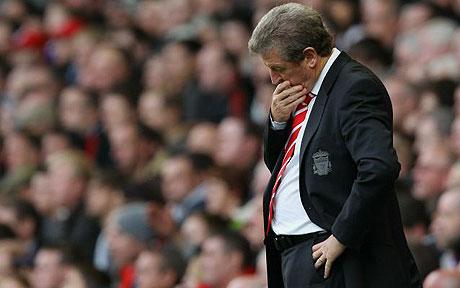 “Spurs are doing brilliantly. They need to be a bit more resilient and stronger but they have the potential to become one of the great Spurs sides if they can make themselves a little harder to penetrate.”

Former Spurs striker and current crisp shiller par excellence Gary Lineker is brimming with excitement about the incumbent squad’s potential whilst admitting that they do have their defensive flaws.

“Wins are hard to come by against the top teams and we have to admit that Tottenham are no longer the Tottenham of old. They are a top team. It is an expensively assembled side and we are not playing against mugs any more.”

The aforementioned quote (in full) from Liverpool manager Roy Hodgson.

“Maybe [Redknapp] has something magic, you know? Liverpool is a test, but everybody works hard and we have the quality to fight for 90 minutes”

Spurs defender William Gallas thinks his manager may be channeling some ethereal forces.

“We’ve had a very good run now and one defeat in eight is a good run at any stage of the season. We have to be happy with that but we are not stupid.

We know that if you go to Tottenham it could be two defeats in nine, but if we play like we did against West Ham we can make sure Tottenham don’t have a cake-walk.”

Hodgson again, hoping that his side make life difficult for Spurs on Sunday.

Tottenham playmaker Rafael van der Vaart is rated at ’50/50′ due to the niggling ankle injury that forced him to sit out of the midweek tie with Bremen.

Jermaine Jenas is also expected to miss out with a calf injury, but Spurs may welcome Jermaine Defoe back to the starting-line up and have also been boosted by the news that defender Michael Dawson has returned to training after spending 10 weeks out with knee ligament damage.

Liverpool winger Joe Cole is ready to return to the fold after a month out with a hamstring injury, with Lucas also set to start after serving a one-game suspension.

Barring any muscular miracles, captain Steven Gerrard is definitely going to miss the game with the hamstring tweak he sustained whilst on England duty last week.

There’s a slim possibility of Spurs suffering from one of their famous European hangovers, so I’m backing Liverpool (against my better judgement) to capitalise – though they’ll be no leapfrogging.

You can watch Tottenham take on Liverpool live online as well as all other Barclays Premier League matches, plus hundreds of football games from around the world. Read our live Premier League football page for more details.