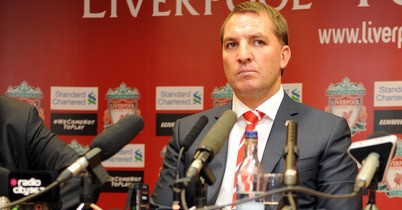 With the announcement of Premier League fixtures, it seems that no other team faces a tougher start to the campaign than Liverpool Football Club. The reds will have to play Top 3 teams in the league i.e. City, United and Arsenal in their first 5 games of the new campaign. Pressure will be on the new manager Brendan Rodgers right from the start who surely did not expect an enormous challenge like that to kick off his anfield career.

Coming to the transfer market, Rodgers has been active talking about the kind of players he would like to buy this summer, however Liverpool have not yet signed a single player. According to reports, reds are heavily linked with Gylfi Sigurdsson who may well be their first signing as Hoffenheim manager Markus Babbel claimed :

“Gylfi wants to stay in England and is in negotiations there. Thus, it makes no sense for both sides for him to return to Hoffenheim, perhaps only for a few days”

Rodgers wants players to be calm on the ball, not lose possession, and work through various channels via short passes that are the basics of Tiki Taka football. The style of football he wants Liverpool to adapt takes considerable time playing together to master it and Rodgers needs to ensure he signs the players swiftly to dwell them in the system.

Like every transfer season, Liverpool are linked with numerous quality players but while Chelsea and Arsenal are bringing reinforcements to make a strong case for competing for premiership title, the reds have been largely inactive in the transfer market.  Joe Cole is set to return from season long loan from Lille and the ever unsettled Italian Aquilani might be coming back to anfield yet again however according to his agent, his Liverpool future lies in manager’s hand.

“The new Liverpool tactician will decide the fate of Alberto. The boy would be happy to stay at Liverpool if he was given the right opportunities.”

Captain Steven Gerrard and versatile Glen Johnson are having a busy tournament at Euros and will surely miss the start and perhaps most part of the pre-season for Liverpool. That’s another dilemma for Rodgers to deal with while implementing his style of play as both players are regular starters for the club.

Although merseysiders will be playing both Manchester clubs and Arsenal at home, still the fans need no reminder of the horrendous home form Liverpool had last season and they need to step up big time. Apart from Sigurdsson, reports do not suggest any other player that closely linked with Liverpool to be signing in near future. Keeping in mind the tough fixtures, reds have to immediately start transfer activity as the international window opens on 1st July. Signing the players late in July or in August might not give new players enough time to settle in well that may lead to poor start, which is the last thing Liverpool want after three disappointing years.