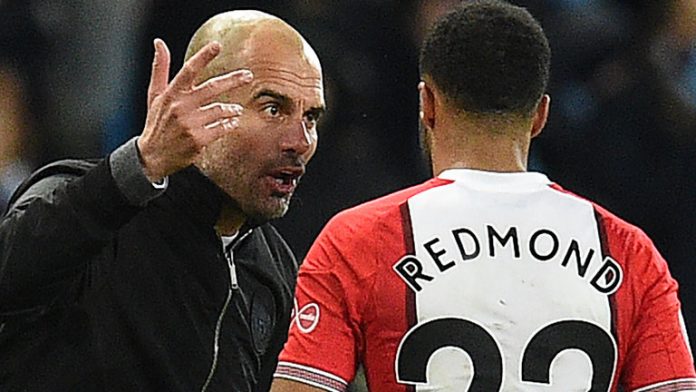 The FA have asked Guardiola to explain his actions following Manchester City’s 2-1 victory over Southampton and Redknapp believes the Spaniard had no right to act in the manner he did.

“It’s something he’s since said he regrets, and I have to say, I didn’t like it,” he told Sky Sports.

“To be honest, I’ve never seen anything quite like it! It was bizarre.

“You can’t tell somebody what to do or how to play when they’re not your player.

“Not everyone is blessed with the quality City have and unfortunately, when you’re Southampton, you have to defend against a team like that.

“Guardiola should concentrate on his own job. What tactics another team uses is nothing to do with him.

“Are they going to open up and lose 5-0? No opposition manager will want to do that. I’m a big fan of Guardiola – how can you not be? – but I didn’t agree with that.”

Redmond subsequently admitted that Guardiola had been complimentary towards him, but Redknapp’s comments are completely correct.

Guardiola’s focus should solely be on his own team and interacting with opposition players in such an animated manner is completely inappropriate – regardless of whether the comments where positive or negative.

If Manchester United boss Jose Mourinho acted in the same way it’s safe to say the reaction would have been much more vitriolic and the FA must instruct Guardiola not to repeat his antics in the future.