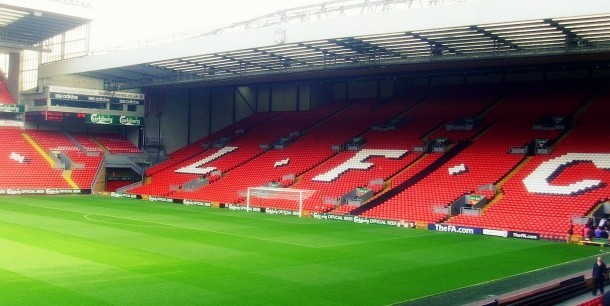 Liverpool’s Managing Director Ian Ayre has given a big idea over how Liverpool are going to turn themselves into one of the financial superpowers of English and European football.

He’s hinted that everything Liverpool do is aimed towards the impending cost control measures which are imminent across the professional game, aimed at penalising clubs that spend more than they earn.

Ayre has revealed that Liverpool’s planned redevelopment of Anfield remains on track as the club looks to increase the current capacity of the stadium up to 60,000, matching Arsenal’s Emirates Stadium. The Liverpool chief told the Sun:

“Our goal is to extend Anfield but we need certainty and that comes with the acquisition of properties. Real progress has been made in acquiring them. Once they have all been acquired we will go through the planning process.”

However, that’s only a fraction of the story as Liverpool look to become a self-sustainable and profit producing business, able to stand alone and compete with the rich owners in football across Europe.

It’s a common aim at Liverpool to produce a situation where the club is not reliant on funds from a personal owner or one particular party.

The club’s owner and leader of the Fenway Sports Group, John Henry, has explained that he wants all entities under the FSG banner to be able to finance themselves and that’s only just started at Liverpool. He told a WEEI FM reporter in a radio broadcast:

“At LFC we have only just begun there to build revenues. It has a global fan base and a global commercial appeal.”

That global fan base is the key and it’s something which Ayre has confirmed continues to grow at a steady and healthy rate.

If Liverpool have access to more fans all over the world then they will open themselves up to new sponsorship and advertising opportunities as well as being able to re-evaluate the deals they currently have.

If they can significantly increase their sponsorship revenue and advertising income, it puts the club into an even healthier financial position than they already are.

It’s all geared towards the Financial Fair Play regulations which have been tried and tested in European football. Ayre added:

“That bodes well in an FFP environment. The real challenge for UEFA is to ensure the rules are applied correctly. It’s only going to work effectively if there are sanctions.”

So the way Liverpool are looking to improve their financial standing in English and European football is quite simple. A larger stadium means increased revenue through gate receipts and ‘on the day sales’ of things like merchandise, food and drinks.

The larger support base means large commercial deals which will tie in with all of the other forms of revenue Liverpool are entitled to such as TV broadcasting cash. That undoubtedly puts the club into a self sustainable situation and a much stronger financial position than they currently find themselves in.