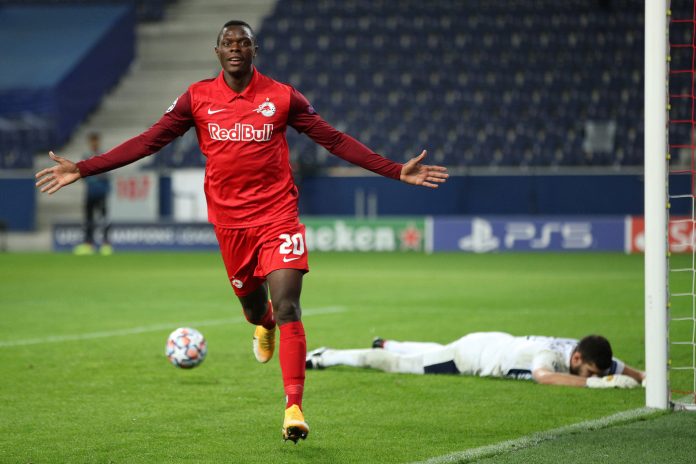 Patson Daka’s comments about following in the footsteps of his ‘big brothers’ may be music to the ears of Liverpool fans.

In an interview with BBC Sport, the Red Bull Salzburg forward says that the previous experiences of top players from Africa are inspiring him to greater heights.

“To see our big brothers like (Pierre-Emerick) Aubameyang, (Mohamed) Salah, (Sadio) Mane, it’s something that gives me the dream that I can also make it,” he said.

“I can be like them. They are my inspiration, knowing that they also come from Africa.

“I think when people are making those kind of comparisons, it’s great, looking at the status of Sadio Mane, the kind of football he plays and the kind of person that he is.”

The 22-year-old has been in excellent form this season, bagging 15 goals in 17 appearances for the Austrian club.

He has been tipped to head to the Premier League, with Manchester United, Manchester City and Tottenham Hotspur amongst the clubs monitoring his progress.

However, a move to Anfield may be Daka’s most likely destination given that they already have three former Salzburg stars in their ranks.

Mane, Naby Keita and Takumi Minamino previously played for the Austrian outfit before moving to the Premier League.

With Mane, Salah and Roberto Firmino all turning 29 before the end of the season, Liverpool may well be in the market for the next generation of talent this summer.

Daka fits the profile of the type of players manager Jurgen Klopp tends to sign, and it would be no surprise to see him join the Reds at the end of the campaign.