After a thrilling competition till the very last matchday, Tottenham’s Harry Kane came out on top as this season’s Most Valuable Offensive Player (MVOP) in the EPL. Chelsea’s Diego Costa and Eden Hazard finished in 2nd and 3rd place respectively. 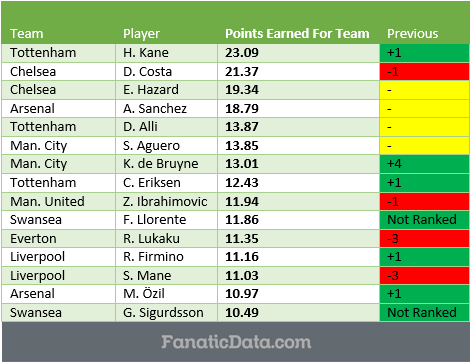 It was a last matchday to remember as Harry Kane had a little more than a half-point lead over Diego Costa entering Sunday. But the MVOP was more or less sealed 13 minutes into the last matchday when Kane scored his 2nd goal of the day.

If a hypothetical scenario had occurred where Tottenham had managed to lose yesterday’s match, and Chelsea’s finished as it did, then there would only be 0.01 points separating Kane and Costa. Alas, that photo finish was not realized, but it goes to show how significant every scored goal is when determining the MVOP rankings.

For 38 matchdays, we reviewed what formation every team was beginning their matches with.  4-2-3-1 was consistently the most preferred formation and we based our starting squad off of that. We present to you the Most Valuable Starting Squad in the EPL this season. 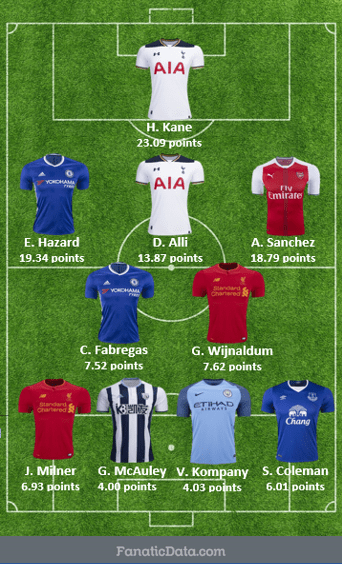 There were plenty of changes to the Most Valuable Start Squad on the last matchday which made for a much different squad than we were expecting. The most obvious change came at the top of course.  Harry Kane not only took away the MVOP award from Diego Costa, but he also supplanted himself as the most valuable striker in the EPL.

While the attacking portion of the midfield remained unchanged, Liverpool’s Georginio Wijnaldum returned to the starting squad as one of the most valuable centre-midfielders after 6 matchdays. The back four had an unexpected change as well. After remaining unchanged since matchday 30, the defense was shaken up when Manchester City’s Vincent Kompany made his way into the starting squad for the first time all season. It was a particularly impressive feat considering the centre-back duo of Gareth McAuley and Alfie Mawson had remained unchanged since matchday 26.

The award for most appearances on the Most Valuable Starting Squad has to go to 2 players.  Arsenal’s Alexis Sánchez and Everton’s Séamus Coleman both entered the starting squad on Matchday 6. They successfully remained there for the rest of the season.

That caps off another season in which we tried to show offensive play in a new light in the beautiful game. We hope you enjoyed our work, and we look forward to presenting next season’s MVOP and Most Valuable Starting Squad in the EPL when August arrives.