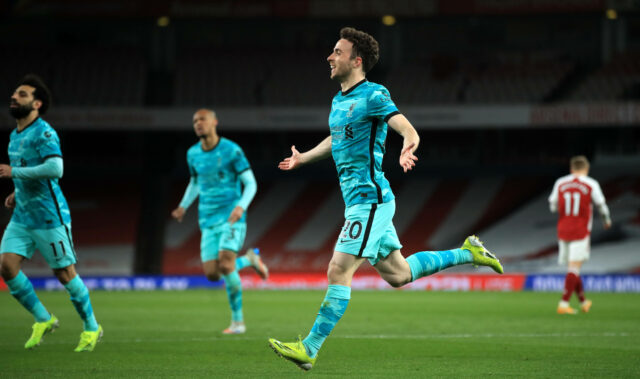 Crooks has suggested that Jota has made a huge impact since he joined the Anfield club from Wolverhampton Wanderers last summer.

The 24-year-old has been outstanding for the Reds, and he has maintained his fantastic form since returning from a long injury lay-off.

He impressed for Portugal during the recent World Cup qualifiers and made a strong impact during Liverpool’s 3-0 win against Arsenal at the Emirates Stadium on Saturday.

Jota, who replaced Andy Robertson, scored twice during the game as Liverpool sealed all three points to move two points behind fourth-placed Chelsea.

Crooks told BBC Sport: “This player has made one hell of an impact for Liverpool since he arrived at Anfield from Molineux.

“Two goals against Arsenal, having come on for Andy Robertson in a tactical switch by Jurgen Klopp, paid massive dividends.”

Jota said after the game that Liverpool have an excellent chance of finishing in the top four in the Premier League.

The Portuguese winger has scored 12 goals for the Reds in all competitions, and his three-month absence hurt Liverpool badly.

He looks in superb nick once again and could play a massive role with Liverpool looking to end the season on a high.

The Reds will face Real Madrid in the Champions League Quarter-Finals on Tuesday, and you can check the preview here.