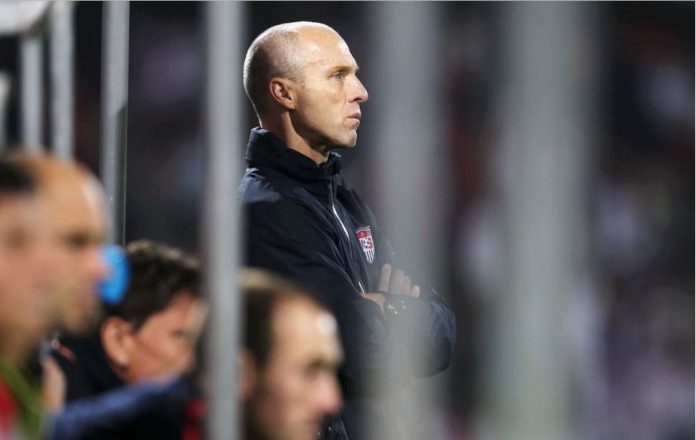 Swansea City are searching for a new manager for the second time this season following Tuesday’s sacking of Bob Bradley. American Bradley took over from Francis Guidolin in October, but the Swans won just two of his 11 Premier League games in charge. They conceded an alarming 29 goals in that period.

Bradley was dismissed amidst a run of crucial games. The 4-1 Boxing Day loss to West Ham was a major setback, though the Swans have a chance to rectify that performance on Saturday at home to Bournemouth.

However, a new manager is unlikely to be appointed before then. Assistant boss Paul Williams and first-team coach Alan Curtis will take charge until a permanent successor is named.

Here are some of the early frontrunners to fill the Swansea hot seat:

As a Swansea native, Wales manager Coleman is tipped as one of the leading candidates for the job. He has enjoyed the best spell of his managerial career in recent times. Coleman led Wales on an unlikely run to the semi-finals of Euro 2016. He also has four years of Premier League experience with Fulham.

Swansea may find it difficult to lure Coleman away from his current job. He has committed himself to Wales until the 2018 World Cup. That said, Wales are struggling early in their qualifying campaign, so Coleman could be persuaded to move on while Euro 2016 remains fresh in the memory.

Aged 42, Rowett is among the leading young English managers. He is recently unemployed following a surprise sacking from Birmingham City. Despite lacking Premier League experience, Rowett has form for turning around a struggling side – Birmingham sat 21st in the Championship prior to his appointment in 2014, but finished that season impressively in 10th.

Recently dismissed by Crystal Palace, Pardew has managed four different clubs in the Premier League. He is renowned for quickly reviving a team’s fortunes. Pardew guided Palace to their highest ever league finish in his first six months on the job.

While clearly a credible candidate, 2016 has seen his stock fall. Palace had gathered the least points over the year out of any Premier League sides prior to his sacking.

Wales and Manchester United legend, Ryan Giggs, was considered for the job in October, but missed out to Bradley. His appointment therefore looks unlikely. Giggs’ lack of managerial experience stands against him given Swansea’s current plight and need for instant results. However, Swans fans will note that their most successful manager in recent times, Garry Monk, enjoyed initial success in the job with no previous experience.

The 69 year-old Redknapp has been out of club management since leaving QPR in early-2015. But his name appears in this list following a recent interview with Talksport, in which he expressed an interest in the job.

Redknapp is sometimes referred to ‘Harry Houdini’, after he kept Portsmouth up against all odds in 2006. His rebuilding job at Pompey then culminated in an FA Cup win in 2008. He enjoyed success subsequently at Tottenham, guiding them to Champions League qualification in 2010.

Hodgson could be forgiven for going into hiding following England’s Euro 2016 debacle. However, like Redknapp, he is hugely experienced at club level and has overseen a miraculous Premier League escape in the past (at Fulham in 2008).

Whether Hodgson is motivated enough for a challenging job like Swansea’s remains to be seen, but his CV ensures that he is likely to be mentioned at upcoming board meetings.