Blog Competitions English Premier League Is Roberto Mancini Standing In The Way Of His Dysfunctional Family?

Reports are swirling today (notably in The Sun, who have run with the typically subtle headline ‘Dead Manc Walking’) that Manchester City’s evil band of profligate mercenaries, nefarious chancers and horrid foreign greed-hounds are becoming increasingly keen for the club to sack coach Roberto Mancini, who they believe is the last obstacle in their way to world domination – or the Premier League title, whichever comes first.

Despite flirting with second place for most of this month, City are now wallowing (eight points behind pace-setters Chelsea) in fourth after two disparaging defeats at the hands of Arsenal and, more recently, Wolves and such failure will not be tolerated.

The tabloid are running quotes from a highly tenuous ‘City insider’, who is claiming that all is not well at Eastlands of late:

“There is hardly a player in the dressing room who has any time for Mancini, the place is a complete mess. There are times when he tries to be a hard man but no one takes any notice.

Team spirit is falling apart because there is no respect for the manager and some players are even guessing when he could go.

They don’t know who they want in, they just want Mancini out.”

…with a second anonymous source adding:

“They’re also baffled by him tactically and he players don’t like his confrontational style.”

Mancini must find it difficult to mask this ‘confrontational style’ during every waking second that he isn’t in the City dressing room, as he always seems to be firmly stuck in his languid gentiluomo mode when facing the media or patrolling the touchlines etc…etc.

Far be it from me to suggest that the gutter press should go about fabricating quotes on an otherwise slow news day, but the vague miasma of desperation is certainly becoming detectable with this batch. 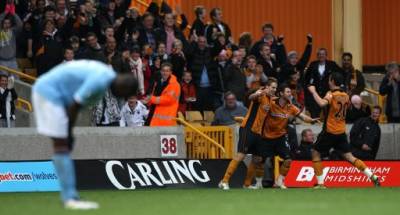 Regardless of the validity of The Sun‘s claims, City’s former captain Kolo Toure has been quick to dispel rumours of a coup, telling BBC Manchester that there is no disharmony in the squad despite Vincent Kompany and Emmanuel Adebayor bickering like teething toddlers on the pitch during the 2-1 defeat at Molineux yesterday and James Milner and Yaya Toure squabbling in the Eastlands tunnel the week previous:

“No, [there’s no problem] at all. We are a team and in any team there are problems. But the important thing is to try to resolve them in the dressing room and the training camp.

We know we are a big team now. Everyone expects us to be at the top. We need to take more responsibility.

When you play for one of the richest clubs in the world, you just need to deliver on the pitch. The criticism is good because that will makes us work harder.”

There is obviously good reason to be sceptical when it comes to such reports, but a fact that shouldn’t escape a mention is that Mancini’s predecessor, Mark Hughes, was jettisoned last December as the aspirant board believed he wasn’t on course to meet their target of a top-four finish.

Though last year’s opening schedule was arguably a little kinder, they are still currently two points worse off now than they were at this stage last season, and it’s safe to assume that, after fluffing £500-odd bajillion over the summer, the Sheik’s expectations may have swollen slightly as well.

Trying To Manipulate The Manipulating
Month In Review: October 2010
Tweet Pin It