Best UK Both Teams to Score Betting Sites in 2021

For punters searching for better value, both teams to score is a market well worth considering. Most commonly associated with football betting, BTTS is now also available on a handful of other sports. Both pre-match and in-play options are available, with both teams to score having become a firm favourite for many. On this page, we will list our favourite BTTS bookies. Meanwhile, we will also deliver our both teams to score betting tips, perfect for those new to this market.

Our Top Betting Sites for Both Teams To Score

How We Rank The Top Both Teams To Score Betting Sites

The vast majority of leading online bookmakers in the UK now offer both teams to score markets. So, just how can punters decide which BTTS betting site is right for them? When ranking bookies in this area, our experts take into account the following factors:

While it is football that attracts the majority of attention when it comes to both teams to score, other sports are available. For example, bets can be placed on both teams scoring a set number of points in rugby, basketball or American football. The best BTTS bookies cover a range of sports. Bet365 offers a number of different options in this area.

There are actually a number of different options surrounding both teams to score. BTTS in each half, Team A to win and BTTS, BTTS in the second half and BTTS and over 3.5 goals are prime examples. So, ensure that a potential bookie caters for your needs in this area too. William Hill offers many such markets, including both teams to score by half time.

As with any form of betting, odds surrounding both teams to score markets must be appealing. Depending on the market selected, this can be a risky form of betting. As a result, the potential rewards must reciprocate this. When it comes to odds, there are few better than 888Sport.

Whether they are specific to BTTS or more generic, punters will often be able to take advantage of betting promotions. Those placing accumulator BTTS bets may well receive a refund if just one leg lets them down. Meanwhile, price boosts, free bets and other offers are also available at betting sites today. Betfred’s “Double Delight & Hat-Trick Heaven” promotion could well be useful to those placing both teams to score bets.

BTTS score betting can be enhanced by additional features. Online bookies today offer live streaming, bet builders and cash out options. Such features make the experience more exciting, personalised and appealing. With football live streaming, a request a price feature and cash out, Ladbrokes is worth checking out.

What Is Both Teams To Score Betting

Both teams to score is one of the simpler markets to get your head around. Generally surrounding football matches, punters are betting “Yes” or “No” on both teams finding the back of the net within the 90 minutes. Bets can be placed before kick-off, as well as in-play. For example, you bet “Yes” on both teams to score during a Premier League match between Arsenal and Southampton. The match ends in a 2-1 in Arsenal’s favour. Regardless of the final result, your bet would win because at least one goal was scored by both teams.

Meanwhile, a “No” bet on a Champions League match between Real Madrid and Liverpool is effectively predicting that just one, or neither, of the teams will score. So, should the match end 0-0 or 1-0, your bet will win. Again, the actual result is not important, with even a 5-0 win for either side being successful here. It is worth noting that BTTS markets require goals to be scored in normal time. While matches may go into extra time, goals scored here will not count. Stoppage time, the few minutes added on by referees at the end of matches, counts, but not extra time or penalties. 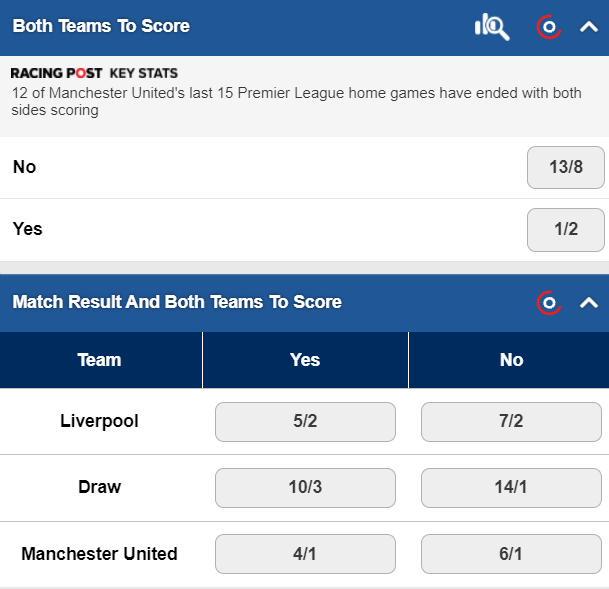 Both Teams To Score Betting Variants

As we have already alluded to, there are a number of different variants when it comes to both teams to score. As a result, it is not just betting on whether both teams will score inside 90 minutes that is available. Let’s take a closer look at BTTS variants, which include combining it with the final result and over/under goals:

Both Teams to Score

The most common BTTS score involves a simple Yes or No prediction. Those betting “Yes” require both teams involved to score during 90 minutes for their bet to win. Meanwhile, a “No” bet needs one or both teams to fail to find the back of the net.

With this variant, as well as betting on whether both teams will score, they are also wagering on the match result. For example, in an FA Cup tie between Leicester City and Aston Villa, punters could bet on BTTS & Leicester to win. Alternatively, another bet could be Aston Villa win and both teams NOT to score.

BTTS in Both Halves

Those looking to enhance the odds on offer can turn to a host of alternate BTTS markets. The first involves betting on whether both teams will score in each half. Halves in football are made up of 45 minutes, in which both teams involved must beat the goalkeeper. While this is not a regular occurrence in football, it still attracts interest from many.

BTTS in First Half

Another option is to bet on the possibility of both teams scoring in the opening 45 minutes. Again, a simple Yes or No must be selected. Such markets come with appealing odds of around 4/1, demonstrating just why it is such a popular option. This market is also available for the second half of matches.

Most punters will be aware of how accumulator bets work. They are hugely popular among football fans. Many combine BTTS punts in the same bet, increasing the odds and potential returns in the process. For example, you may wish to bet on five Premier League matches over the weekend. On three, you back both teams to score and on the other two you bet on both teams not scoring. Significant earnings can be made from a small stake in many cases.

Our Top Both Teams To Score Betting Tips

When placing a BTTS score bet, there are a number of factors to consider. So, before parting ways with your hard earned cash, be sure to take in the following both teams to score tips:

Both Teams To Score and In Play Betting

BTTS is one of the most popular in-play football markets. Based on on-pitch events, odds fluctuate in real time. Of course, goals being scored will have a major impact upon this market. Meanwhile, in some cases, it will settle the market all together. Those with a good knowledge of football and who are prepared to be patient could well benefit from in-play BTTS markets. For example, if no goals have been scored after 75 minutes, it is likely that both teams will fail to find the back of the net before the full-time whistle. So, be sure to keep a close eye on the action, as well as the odds.

Placing a Both Teams To Score Accumulator

An accumulator bet is made up of several selections, combined into one wager. In order for such bets to be successful, all selections must win. This type of bet is now synonymous with the football community. Many place acca bets over the weekend or on a European midweek fixture list. Meanwhile, the appeal of this bet type has also increased thanks to acca insurance. Offered by many bookies, the promotion means that refunds will be delivered to those who see their acca bet lose because of just one pick. BTTS acca bets are very popular too. For example, betting on six matches over the weekend, specifically on whether both teams will score in each. An example of a BTTS acca can be found below:

Chelsea vs Crystal Palace – No

Burnley vs Arsenal – No

Which Sports Can I Bet Both Teams To Score On?

Both teams to score is generally specific to football. However, punters may come across this market in other sports, or at least some that are similar. Let’s take a look at some other BTTS sports available today:

Ice Hockey – The format of ice hockey is similar to football, in that the aim of the game is to get the puck into the goal. As such, some bookies will offer the BTTS score option on matches from the NHL and other leagues.

Basketball – While not strictly being BTTS, basketball fans will have the option to bet on both teams scoring over a set number of points. Whether it be over the entire game or in a particular quarter, such markets are an appealing alternative to moneyline options.

American Football – The most effective method of scoring points in American football is through touchdowns. On some betting sites, it will be possible to bet on both teams scoring a touchdown.

Having read this page, you should have a clear understanding of how BTTS works. Specific to football, the market attracts a great deal of interest from punters. It is for this reason that a number of variants are now available. No matter which league or tournament you follow, a both teams to score bet could well be the way to go. Be sure to do your research before placing bets. Each of our BTTS bookies is safe, reliable and licensed in the UK. Meanwhile, they also come with a host of additional markets and features. Sign up with your favourite today, claiming your welcome bonus in the process.

Both Teams to Score FAQ’s

What is both teams to score?

Both teams to score is a betting market where the outcome centres around whether both football teams find the back of the net in normal time. Goals scored in extra time or penalties are not eligible, with a simple Yes or No prediction being required from punters.

Should I trust both teams to score betting tips?

Some tipsters will centre their predictions around BTTS markets. Unfortunately, regardless of how much homework has been done, no tip can guarantee success. However, tips can still be useful. Be sure to only follow trustworthy tipsters and experts.

How does both teams to score and win work?

An option for punters is to bet on BTTS and a team to win in the same bet. For example, both teams to score and PSG to win. This means that PSG must win the game, with their opponents also scoring during the 90 minutes.

Is both teams to score in both halves available with all bookies?

BTTS in both halves is another increasingly popular market. However, it is not offered by all bookies. So, be sure to look at whether a potential bookie covers this market before signing up.

Is BTTS only available on football?

Yes. BTTS is specific to football. However, similar alternatives can be found on other sports.