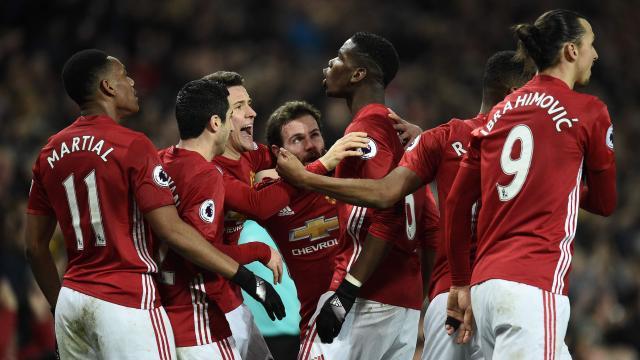 Manchester United escaped the festive fixture period with nine points out of nine—no thanks to Lee Mason and in large part because of Mike Dean—so now it is time to look forward to 2017 before the FA Cup third round tie against Reading at the weekend.

United’s 2016 was disappointing for the most part, from the dismal 3-2 loss at Upton Park which all but ended hopes of Champions League football in 2016-2017 to the string of four straight league draws at Old Trafford under Mourinho. There were some great moments as well, however, including a brilliant FA Cup win over Crystal Palace at Wembley and the unbeaten run to end the year. And don’t forget Louis van Gaal’s cheeky dive against Arsenal in February!

We now move into 2017, and with United still alive in all four competitions, it could be a great 12 months yet. The results are following the performances, the chant-makers are thriving (Ibra’s is brilliant), and Mourinho is finally starting to impose his vision on a club that has lacked direction since Sir Alex Ferguson’s departure. With that in mind, here are my five wishes for the Red Devils in 2017:

In SAF’s final four seasons at the club, United took 87.3% of the points available to them in the league at home. In the past four seasons, that number has dropped to 66.7%. Teams used to fear trips to Old Trafford, but under Louis van Gaal teams like Norwich, West Brom, Swansea, Southampton (twice) all came away with three points. United may have struggled significantly more on the road, but playing at home is no longer a guarantor of three points.

This season hasn’t been great in those regards, with the aforementioned draws and a derby loss to City under Mourinho’s belt, but there have been some brilliant performances including the wins over West Ham and Man City in the league cup, the demolitions of both Feyenoord and Fenerbahce in the Europa League, and the recent victories in the league. Old Trafford’s atmosphere hasn’t dwindled, but a lovely sense of arrogance has begun to return as quickly as United’s form and it would be great to see teams walk onto the pitch with fear in their eyes as they once did.

Carrick is one of United’s most understated performers over the years, but his importance to the team this season has been obvious; when he starts (across all competitions), United are 11-0-2 with a 31-8 goals-vs-conceded ratio. In games where he hasn’t featured at all, United are 4-4-3 across all comps with a 12-13 goals-vs-conceded ratio. The statistics are appalling.

Blind is a ready-made stand-in for Carrick.

At 35, Carrick doesn’t have the legs he did six or seven years ago, but his sense of awareness often means he’s in the right place before a pass or run is even made, allowing him to engage without moving too much. His work as a pivot, driving United forward with pinpoint passes up to the forwards, has also helped United unlock stubborn defenses and ratcheted up the team’s pace of play. Every United’s fan biggest injury worry (outside of Ibrahimovic) is Carrick, who seems irreplaceable at the moment with Fellaini, Herrera, and Schneiderlin all failing to truly fill the void.

What most people don’t realize, however, is that United have a ready-made replacement who’s been played out of position since he came to the club: Dutch midfielder Daley Blind. We’ve seen him at center back, we’ve seen him at left back, but the Old Trafford faithful have rarely seen him in his preferred position: defensive midfield/pivot, Carrick’s No. 4 role.

Blind was brilliant for the Dutch in this role at the 2014 World Cup, driving them to the semifinals with a goal and three assists, including the wonderful looping ball for Robin van Persie’s famous leaping header. His forward balls are as precise as Carrick’s, his defensive intelligence has been on show at center back, and his strike can be sweet when given the opportunity (as he was against Liverpool and Shrewsbury last season and Sunderland on Boxing Day).

One thing that frustrated me about the club even more so than the football over the past few years has been the transfer business. The buying has been frustrating at times (32.4 million for Fellaini, 35 million for Schneiderlin), but generally when they’ve spent a lot of money they’ve brought in quality players: Juan Mata, Anthony Martial, Paul Pogba, Ander Herrera, and Henrikh Mkhitaryan just to name a few. United have spent quite a lot, but they’re bringing in top guys who have flourished at the club (and are now worth more than the transfer fee).

The more annoying side has been the selling; spending is not the problem, it’s the net spend. Where you see teams like Monaco, Real Madrid, Dortmund, and Chelsea recoup a lot of the money they spend through shrewd sales, United join the likes of PSG, City, and Barcelona in doing the opposite.

The same club that sold Cristiano Ronaldo for a then-world record transfer fee has lost 12 million euros on Angel di Maria in the space of a season, sold Shinji Kagawa—who has been quite productive at the Westfalenstadion—for mere 8 million euros, and let a young English talent in Wilfried Zaha go for just 3.8 million euros. You feel United could do better, which makes the news that Mourinho will not accept lowball bids (including 20 million pounds for Schneiderlin) music to my ears.

Of the four talented forwards that United have assembled—Jesse Lingard, Anthony Martial, Marcus Rashford, and Memphis Depay—over the past two seasons, only one, Lingard, has truly gotten the game time and development his skills demand. He’s not the finished product, but he’s improved dramatically over past two seasons and has become somewhat of a regular under Mourinho with 16 appearances (all comps) this season. A pair of astonishing goals at Wembley, including the FA Cup winner, haven’t hurt. Rashford and Martial’s development is crucial to United’s future.

Martial and Rashford, while having some great songs to their name, have stagnated ever so slightly after bright breakout campaigns last year. Both made a lot of noise right off the bat, with Martial scoring on his debut against Liverpool and Rashford scoring on his first-team debut, Premier League debut, Manchester Derby debut, and England debut. Martial led the team with 17 goals in all competitions last year while Rashford added eight of his own.

Both have undergone some of the growing pains all young forwards endure, but the lack of regular game time hasn’t helped. The two put in brilliant performances on either side of New Year’s, with Martial giving Calum Chambers a torrid time against Middlesbrough before Rashford did the same to Havard Nordtveit at West Ham. Unless Mourinho uses the upcoming cup and league matches to get them loads of minutes, we may not see either kick into full gear at all this season.

Then there is Memphis, who has been frozen out of Mourinho’s plans and apparently has sought a path out of United. If he leaves, I wish him the best of luck and hope United recoup their payment for him, but if not, I still think he has a future at OT. If the confidence he showed in the UCL qualifying demolition of Club Brugge last season returns, he can be a match-winner. His attitude will certainly have to improve, but I think if he stays and takes advantage of United fighting on four fronts, he can reacquaint himself nicely with his manager.

5. Don’t Become a Club that Settles for “Top Four”

United’s mid-Autumn draws may have pushed them off of the title race, but most fans’ biggest fear for the club is settling into an attitude where claiming a Champions League place is enough. All teams go through rough patches, but teams under SAF were never satisfied with the top four, always participating wholeheartedly in the title race until the math said otherwise.

We all enjoy watching ArsenalFanTV expose Gunners fans satisfied with finishing above Spurs, but I think United fans may be worried that the same complacency may begin to creep in after (likely) four straight years without a Premier League parade. With the resources and pedigree on show at Old Trafford, this team should always be in the thick of the title race until the very end; that attitude must return in 2017.

So, there are my wishes for 2015. What are yours? Let me know in the comments, or Tweet me at @TheKhandyman.