Much like poker, it’s technically impossible to be ‘good’ at Bagatelle. There is absolutely no art in sending a ball-bearing cascading down through a uniform maze of pins and therefore racking up the big scores is entirely dependent on your luck – or for the less whimsical, completely futile probability.

Still, it is this random game of chance that Manchester United manager Sir Alex Ferguson chose to describe the factors that were governing Wayne Rooney‘s visibly diminishing future at the club just a matter of hours ago.

Ferguson met with United chief executive David Gill at the club’s Carrington training ground this morning to mull over the consequences of Rooney’s self-imposed limbo, and to also ascertain the breadth of punishment for what they seem to view as ‘dissent’ on behalf of their prized-asset.

Rooney has breached the ‘fourth wall’, an offence that previously signalled the demise of former club captain Roy Keane‘s career at Old Trafford.

At the behest of Ferguson, United cancelled Keane’s contract back in November of 2005, following the derogatory comments that the outspoken Irishman made toward Rio Ferdinand on the club’s in-house television channel MUTV – even though the interview was never actually broadcast.

However, it can be argued that Keane’s influence (and career) was on the wane at the time and so the tenacious midfielder had relatively little left in the way of market value. Rooney is very much still a considerable material asset as far as United are concerned – so a tearing up of contracts was never going to be a viable outcome. 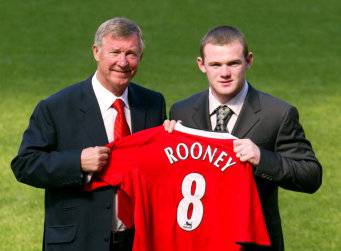 The good old days, Ferguson and Rooney in 2004

As of this morning, Ferguson and his superiors were left with three distinct choices.

Firstly they could to chose to exile Rooney to the wilderness of the reserves for 18 months, but such a hard line stance would ultimately result in little more than a £100,000-a-week money-vacuum going to waste on in the doldrums before walking out of the club for free the summer after next – which is never going to be allowed to happen.

Secondly comes the dwindling possibility of a reconciliation. Considering that neither party’s comments have been particularly vitriolic, there were reasonable grounds for an ‘olive branch’ scenario to arise in which Rooney was offered further assurances on the future strengthening of the United squad in return for a confirmation of his future services i.e. the signing of a new contract.

The third? Well, in short, Ferguson and the rest of the Old Trafford hierarchy would be left facing the unenviable task of having to pre-emptively transfer-list their most valuable player, along with an accompanying suspension and/or fine, thus effectively rendering Rooney ‘out of service’ until the transfer window reopens in January and any potential bids could begin to be courted.

And them’s, as they used to say when I were a nipper, is the breaks.