Red and black have long been the colours associated with the club, with the Leverkusen home shirt featuring both. The club’s nickname is Die Werkself, which translates to “The Company’s Eleven” in English. FC Koln and Borussia Monchengladbach are the main rivals of Leverkusen, with the club also regularly competing in European competitions.

The club’s logo features on the Bayer Leverkusen kit and other memorabilia. The logo features two lions, as well as the date in which the club was established. The logo has changed significantly over the years, with the current design having been in place since 2006.

The Bayer Leverkusen kit changes annually. However, fans can rest assured that the Bayer Leverkusen home shirt will always be red. Black shorts and socks also generally feature. Meanwhile, the away and third kits are also available, featuring in Leverkusen away matches. The club announced a deal with Castore ahead of the 2022-23 season, with the British sportswear manufacturer having become Leverkusen’s official kit supplier for the next five years. 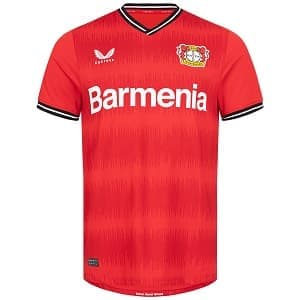 Bayer Leverkusen FC has not won a great deal of trophies over the years. As 5x Bundesliga runners up, the club is still searching for its first German title. With the likes of Bayern Munich and Borussia Dortmund to compete with, it appears unlikely that they will be crowned champions anytime soon. Below is a breakdown of Leverkusen’s honours over the years:

Leverkusen have been without a major trophy since 1993, when they won the DFB-Pokal. As a result, they are understandably given long odds to end their wait during the 2022/23 season. The table below shows the odds available surrounding Leverkusen, which come from leading online bookies:

Like most football clubs, the Bayer Leverkusen squad looks different each season. New players are signed, while others depart every transfer window. Below, we take a closer look at the current Bayer Leverkusen squad. Having seen players on board, it will become clearer as to what Leverkusen’s chances of success are this season:

A number of players have written themselves into Bayer Leverkusen folklore by making hundreds of appearances for the club. Between 1982-1999, German goalkeeper Rüdiger Vollborn put on the Bayer Leverkusen kit a record 486 times. The table below shows the players who make it into the top 10 for Leverkusen appearances:

The Bayer Leverkusen stadium has been home to some of the best strikers in Europe. Many have stuck around for a number of years, scoring a large number of goals during their time. Ulf Kirsten sits at the top of the pile, having banged in a massive 220 goals.

Meanwhile, before his time with Tottenham Hotspur and Manchester United in the Premier League, Dimitar Berbatov scored almost a century of goals for Leverkusen. The table below shows the top 10 leading goalscorers in Bayer Leverkusen FC history:

Leverkusen is a team that rarely spends big in the transfer market. However, there are some signings that stand out in terms of finances. The club is better known for developing young players, before selling them on for a significant profit. Below are the top 10 Bayer Leverkusen signings of all time:

Meanwhile, the table below shows Leverkusen’s record departures over the years. Kai Havertz’s transfer to Chelsea is the standout deal, with many others having left Leverkusen for the Premier League too.

Gerardo Seoane is the current Bayer Leverkusen manager. The 43-year-old enjoyed a professional career in his native Switzerland, before working his way up at Luzern. It was at Young Boys where Seoane really made his name as a coach, leading them to three consecutive Swiss titles. Seoane replaced Peter Bosz, who left Leverkusen in March 2021. Below is a complete list of all Bayer Leverkusen managers over the years:

The BayArena is where Leverkusen play their home matches. The stadium was known as the Ulrich Haberland Stadium when it opened in 1958. Since then, the stadium has been renovated twice, in 1997 and 2009. It has a capacity of 30,210 for domestic matches and 29,412 for international games. While not being one of the biggest stadiums in Germany, the BayArena still helps to create an intimidating atmosphere for visiting teams. 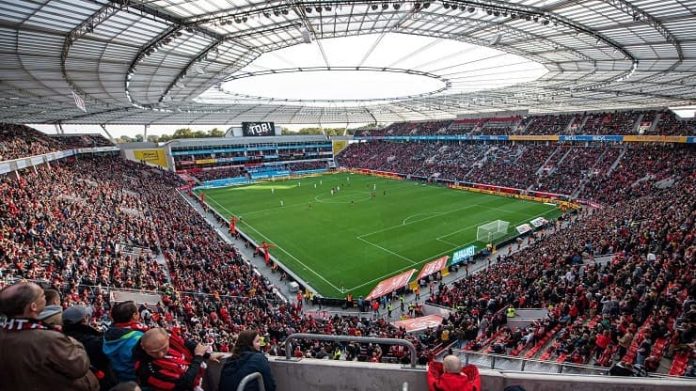 Bayer Leverkusen holds rivalries with the likes of Borussia Monchengladbach, FC Koln and Mainz. Meanwhile, the German side has a handful of clubs across Europe that they have a strong association with. Below is a breakdown of Leverkusen’s main rivals.

As the biggest team in Germany, many clubs enjoy nothing better than beating Bayern Munich. Unfortunately for fans at the BayArena, Leverkusen wins over Bayern have been few and far between. The table below shows both Bundesliga and DFB-Pokal results between the two over the years:

It takes some 2 ½ hours to travel from Leverkusen to Mainz. However, this has not stopped a significant rivalry developing between the two clubs. Leverkusen has recorded a number of Bundesliga wins over Mainz, while they also came out on top in the only DFB-Pokal encounter between the two:

Leverkusen knocked Rangers out of the Europa League in 2020. The German side won 3-1 at Ibrox, before recording a 1-0 success on home soil. Leverkusen would ultimately be eliminated by Young Boys in the following round.

Leverkusen were drawn alongside Scottish giants Celtic in the Europa League Group Stage back in 2021. The two fixtures between the duo saw 9 goals scored, with Leverkusen collecting the maximum six points in the process. They won 3-2 at home, before running out 4-0 winners at Celtic Park.

Leverkusen has long been regarded as one of the leading football clubs in Germany. Despite having never won a Bundesliga title, Leverkusen regularly competes in the Champions League, with the likes of Florian Wirtz, Paulinho and Moussa Diaby giving fans at the BayArena hope for the future. Our guide has covered everything surrounding the club, including the Bayer Leverkusen players and Bayer Leverkusen kit.

Read review
Visit Site
Learn More Close Learn More
18+ BeGambleAware.org, T&Cs apply. Full T&C’s Apply. New customers on mobile only. 7 days to claim and stake £10 minimum bet at odds of 1.5 or greater to qualify. Free, void, cashed out or partially cashed out bets do not qualify. Max 3x £10 free bets credited on bet settlement. Free bets must be used on 4 or more selections with selection odds of 1.3 or greater. Free bets are non-withdrawable and stake not returned with winnings. 7 day expiry
£10
UKGC

Where is Bayer Leverkusen?

Bayer Leverkusen is a football club based in Leverkusen, based in the North Rhine-Westphalia.

Who is Bayer Leverkusen’s all time top scorer?

Who is Bayer Leverkusen’s current manager?

Gerardo Seoane is the current Leverkusen boss. The 43-year-old Swiss coach took over in 2021, having previously been in charge of Young Boys in his homeland.

What are the best betting odds on Bayer Leverkusen?

Leverkusen are 6/5 to finish in the Bundesliga top 4, which would secure their place in the Champions League. This is a far more appealing price than the 80/1 for the club to win the title.

Who is Bayer Leverkusen’s record signing?

The arrival of Kerem Demirbay for £28.8 million back in 2019 remains Leverkusen’s record transfer when it comes to arrivals. The club is more commonly associated with big-money departures.

Who are Leverkusen’s biggest rivals?

FC Koln and Borussia Monchengladbach are the main rivals of Bayer Leverkusen.