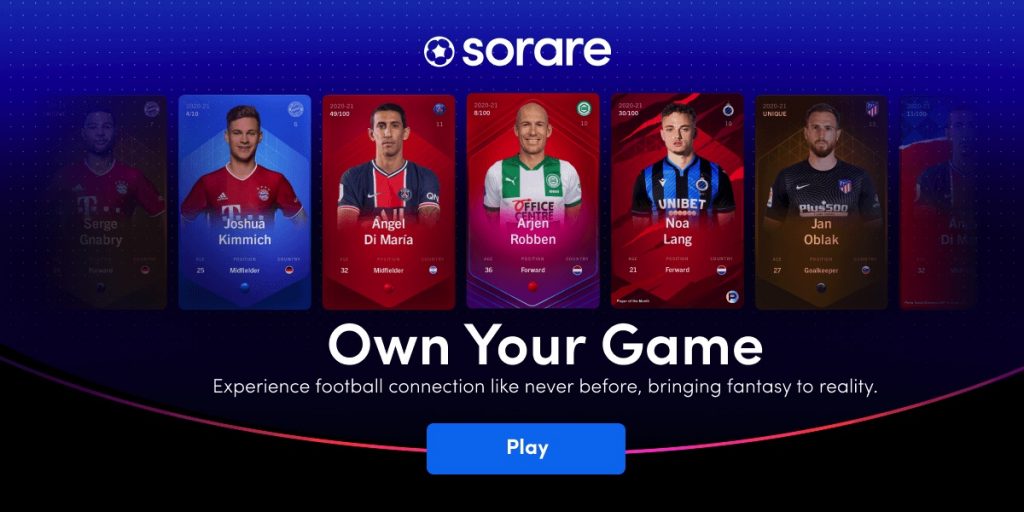 SoRare has been tipped to be the next big thing in fantasy football games, but how does it work? Find out all you need to know via our in-depth SoRare review.

An Introduction to SoRare

SoRare is the latest innovation to hit the fantasy football scene, giving players the chance to enter tournaments and compete for lucrative prizes every week.

Backed by major brands such as Opta, Ubisoft and Consensys, SoRare covers more than 20 major leagues and tournaments from across the world.

The game stands apart from the competition as it is powered by blockchain technology, allowing players to authenticate, buy, sell and trade their digital cards with other users on the network.

How to Get Started on SoRare

When you first sign-up for SoRare you will immediately be given 10 common cards from which you will be able to create your first team.

All new players enter their team of five players in the Rookie League. Enter four leagues or play for four weeks and you will be promoted to New Manager.

You can improve your team via the Transfer Market, which is undoubtedly one of the most exciting features in the game.

This section of SoRare is where you buy and sell players, giving you the opportunity to improve your squad as you progress through the game.

You can also help your players develop, using the Special Training League to improve their XP. This is ideal if you want to make a profit in the transfer market.

Also known as SO5 Fantasy, your selected team of five players will compete in tournaments against other SoRare teams. Your line-up must contain:

There are various tournaments available, all of which come with power cap requirements to ensure that each game you play is fair.

This places a limit on the overall team strength, thus preventing players with big bankrolls from blowing away their rivals with the likes of Lionel Messi every week.

Once you have chosen your team and picked your captain, you must enter them into a tournament before the stated deadline.

The Gaming Arena tab shows you the tournament deadlines and the latest statistics, thus allowing you to track your progress in the game.

One of the best ways to make significant progress in SoRare Fantasy Football is to enter your team into Rare Tournaments.

Rare player cards are available in the pre-tournament auction, giving you an early opportunity to make improvements to the players at your disposal.

A major advantage of entering Rare Tournaments is the point range of the cards is fairly narrow, improving your chances of competing for prizes.

This factor makes the selection of your captain even more important, as he is the player who can bag all-important bonus points for your team.

Once you have got to grips with the basics on SoRare, you will be ready to take things to the next level by assembling either a Super Rare or Unique team.

Ten new Super Rare cards are put up for auction every week, meaning that you could build a full Super Rare team in just a few weeks.

Alternatively, building a Unique team is where the real action is on SoRare, requiring you to negotiate with other players to secure these cards from other players.

Focusing on acquiring Super Rare or Unique cards is a tactic that has been proven to quickly fire players to the top of the standings if they make the right decisions.

The involvement of respected brands like Ubisoft and Opta demonstrates that SoRare is a trustworthy platform and players can sign-up with confidence.

SoRare operates on blockchain, meaning that there is physical representation of every single transaction on the internet.

The cards you purchase last a lifetime – if you want to hold onto Messi until he is old and grey, you are perfectly within your rights to do so.

Another factor that should provide you with peace of mind is the number of official licenses SoRare holds with football clubs across the world.

As of April 2021, the platform has been approved by 130 professional clubs and more are expected to be added over the coming months.

With backing from Gerard Pique, Rio Ferdinand, Oliver Bierhoff and more, SoRare is unquestionably a platform you can trust.

While it may seem daunting to understand how SoRare works, it is actually a reasonably simple concept to get to grips with.

The buying, selling and trading cards element bears more than a passing resemblance to the physical card collections that were so popular during the second half of the 20th century.

However, SoRare has the added bonus that you can win prizes and make a profit from playing this excellent fantasy football game.

Players are required to use their football knowledge to make progress on SoRare, making this a game that becomes hugely addictive.

It is worth noting that the value of cards are linked to the market price of Ethereum, meaning that players should only spend money on the game that they can afford to lose.

However, the popular cryptocurrency’s value has risen markedly in recent and has shown no signs of slowing down just yet.

If you love the thrill of collecting cards and enjoy the challenge of fantasy football, it is fair to say that SoRare will be right up your street.

Visit the SoRare website today and get involved with a game that sparked excitement amongst football fans around the world!