Thanks to Elijah Woods’ acting in the 2005 football hooligan movie Green Street, ‘I’m Forever Blowing Bubbles’ has become one of the most recognised club anthems in English football, behind that of Liverpool’s’ ‘You’ll Never Walk Alone.’

Unlike the words uttered by thousands of Hammers on match day, West Ham’s dreams are not about to fade and die. Gianfranco Zola has built a fortress at the Boleyn Ground and together with Steve Clark; the pair have turned a mid-table team into one capable of a top eight finish. Even European football is still on the cards, if they can maintain their current strong league position of 7th.

How can they make it back to Europe?

West Hams bid for European football is definitely a reality as the Irons occupy the position needed for an outside chance of UEFA cup positioning. There are, however, a few factors that could contribute to West Ham failing in their conquest:

1. Premier League Positioning: West Ham occupy 7th spot in the division behind Aston Villa and Everton (5th and 6th respectively), but other teams ARE knocking on the door to disrupt the Hammers European dreams. Wigan, Fulham, Manchester City and Tottenham stand between the East London club and Europe, so as many points as possible in the closing stages is a must to avoid a slip down the table.

2. National Cups: Unlikely…I repeat VERY unlikely that this year’s F.A cup will have a bearing on European positioning. With Manchester United winning the Carling Cup and the FA Cup almost certain to go to a top 4 side, there is no European place on offer. Unless, Everton suffer a massive dip in form and slide uncontrollably, but still manage to win England’s oldest football trophy. As I said, unlikely.

3. 08/09 UEFA Cup: If Manchester City defy their Premier League form and produce a win here, they will indeed steal 7th spot from the league and gain a place for the 09/10 tournament. Can Mark Hughes destroy Zola’s aspirations? 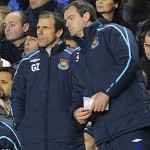 The Chelsea legend is now in the frame to make his mark at West Ham. Despite strong ties with the West London club and seven years as a player there, the 42 year old Italian has seemingly given West Ham the flair and desire to compete in both English and European football. The most avid Blues fan will attempt to convince you that he is simply biding his time for a job offer in the summer, that is if Hiddink gives his word of leaving the London club.

Steve Clark also spent several years at Chelsea as an assistant under both Mourinho and Grant. In the summer after Grant’s dismissal, Clark was linked with a move to Everton as David Moyes right-hand man. This proved to be just speculation but on 11th September, Steve handed in his resignation in the hope of joining Zola at West Ham.

The pair have gone about their business superbly and pushed the Hammers a step further than under the reign of Alan Curbishley.

After 29 games the Irons sit on 40 points and despite the goalless draw against bottom of the league West Brom on Monday, have sported their best form in recent time. Having only lost twice in the league since the New Year, (one being the 1-0 defeat to Manchester United), West Ham have impressed with their attacking displays. The passion displayed has impressed fans and pundits alike and the troubles and turmoil of the Tevez affair is now lodged firmly in the past.

Swiss international, Valon Behrami, had been West Ham’s player of the year, but news of his six month injury would could put a massive dent in their target for short-term success. In fact injuries in general have hardly been light at Upton Park, as Matthew Upson became the latest casualty against West Brom. The good news is that he’s likely to be back for the weekend match against Blackburn.

West Ham are also missing key striker Dean Ashton, who won’t be back until at least the summer break. The sale of Bellamy in January has given way for Carlton Cole to make an impact and the striker has bagged 11 goals so far this season. All in all, Zola has done a magnificent job with the squad given the circumstances.

Conclusion of the season

The seasons climax could be crucial for West Ham as they look to improve on last year’s 10th spot. This weekend they face relegation battling Blackburn Rovers at Ewood Park before taking on Sunderland a week later. Whether West Ham posses the fire-power to maintain their recent good form will be concluded in the coming weeks, but even if they don’t make it back to Europe, supporters should take solace in the fact that they finally have a manager that can take them places in the fuure.