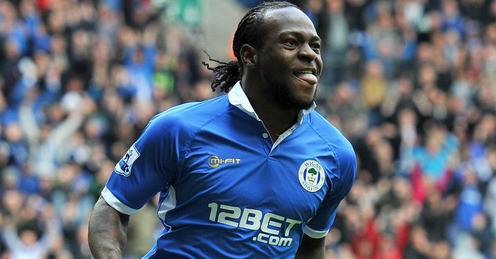 Wigan put on a show on Saturday to all-but-secure their Premier League status for another year, and delighted the DW Stadium and onlookers in the process. A 4-0 win over Champions League qualification hopefuls Newcastle mixed a determined and dogged defensive approach with sublime attacking play, and Roberto Martinez’s men were good value for their comprehensive victory.

With Newcastle undoubtedly the surprise package of the season, and Alan Pardew crafting a team of rough-around-the-edges players into some of the most sought-after stars in the league, the victory is all the more impressive. The first-half showing by the hosts was nothing short of masterful, as Wigan were quite simply too good for their Tyneside opponents.

A Victor Moses brace and goals from Shaun Maloney and Franco Di Santo gave the home side an unassailable lead, and in truth Wigan could have scored more in the first 45. The win sends Wigan up to 16th place and 37 points, three ahead of the bottom three, and three adrift of the holy grail of 40.

Wigan’s escapology act from last season had the club’s fans on cloud nine, but this season seems to be even more of an achievement. Given the fact that the Latics were bottom of the pile not too long ago, and faced a stern fixture list, Martinez and his team should be proud of their end of season heroics.

Five wins in the last eight games has lifted Wigan above their relegation rivals, with three points against Liverpool at Anfield, at home against Manchester United and at the Emirates against Arsenal, along with yesterday’s triumph, sticking out in the memory. The Latics could already be safe, but one win from their last two games against Blackburn and Wolves, will ensure Martinez’s men stay in the top flight for another year.

The manner of the afore-mentioned victories, and Wigan’s play for the majority of the campaign, is the real standout point. Martinez has urged his troops to consistently get the ball down on the deck and play football, even against their supposedly superior opponents, and this must be admired. When a team goes into a spiral of bad results, like Wigan have this season, there is a temptation to try and get the ball forward in a direct fashion rather than keeping possession, and the Latics have resisted this urge for the majority of the campaign.

The likes of Victor Moses, James McCarthy and Maynor Figueroa have all been excellent, and the cash-strapped side may have a battle on their hands to hold onto their best players. Like Wilson Palacios, Antonio Valencia and Charles N’Zogbia before them, the chance to play for a bigger club could be too good to resist.

Looking forward, there could be a few changes at the DW Stadium this summer, and the club’s fans will hope that Wigan can get off to a better start next term. Despite their heroics in escaping relegation through end-of-season wins over the last couple of years, the team will hope to not leave it so late next term, and secure their Premier League status well before the last five games. A sensible summer in the transfer market and a continuation of Martinez’s positive attitude could well see Wigan as more than relegation escapees in 2012-13.