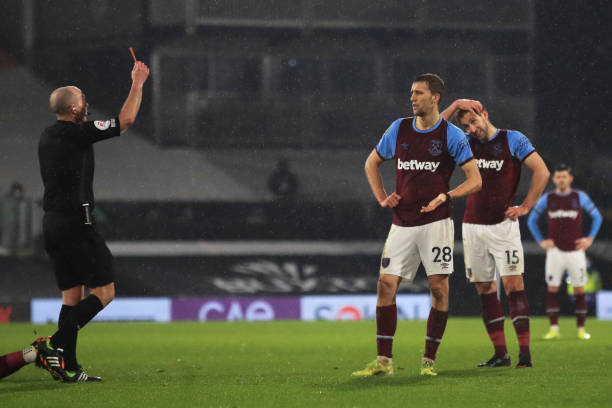 West Ham United have been handed a major boost ahead of their FA Cup clash against Manchester United.

As per the Athletic, Tomas Soucek has had his red card overturned after a successful appeal by the Premier League club.

The towering midfielder was sent off against Fulham for violent conduct by Mike Dean. The Hammers star leaned into Aleksandar Mitrovic with his elbow and the referee decided to brandish a red card after reviewing the incident with the help of VAR.

Soucek was all set to miss the games against Manchester United, Tottenham Hotspur and Sheffield United and his return will certainly delight David Moyes and the West Ham fans.

The 25-year-old has been outstanding for the Hammers since his move to the London club. He has scored eight goals in 23 Premier League appearances this season and his absence against United could have been damaging.

The fans will also be excited to have him back for the upcoming Premier League games especially now that the Hammers have a decent chance of pushing for European qualification this season.

Meanwhile, referee Dean has revealed that his family have received death threats following his controversial decision.

The 52-year-old has received a lot of abuse and he has requested not to be included in the list of referees for this coming weekend’s Premier League games.

I am glad my red card against Fulham has been overturned. I’ve checked it, I’ve gone over 200 games without a single red card. My entire career. I am looking forward to helping the team in the important games this week! Thanks for your support!#westham #whu #COYI pic.twitter.com/wANFeAFmhf

If you look "football gentleman" up in the dictionary, picture of @tomassoucek28 appears. 158 games for Slavia, not a single red card.

We're glad nothing has changed in England. ☺️ https://t.co/0MQTPXc2sI