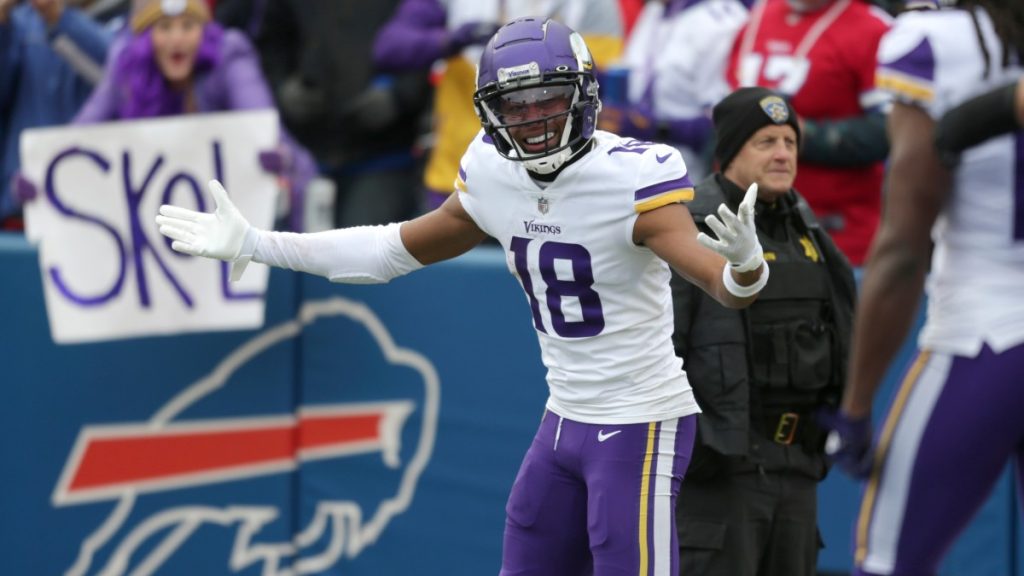 The player of the week awards were announced on Wednesday morning and rather unsurprisingly Justin Jefferson highlighted the top players of the week, after an exceptional performance against the Bills on Sunday.

Many have already hailed the Bills-Vikings match at the weekend as an early contender for game of the season, as the Vikings just squeezed out Buffalo 33-30 in overtime on Sunday.

The best player on the field during the exciting matchup was without a doubt Justin Jefferson, as the Vikings WR put in a jaw-dropping performance that was more than enough to earn him the NFC offensive player of the week award.

Jefferson posted 10 receptions for 193 yards and a 22-yard touchdown against the Bills and some of the receptions were enough to earn the award for Jefferson on their own, including this absolutely crazy pick from the sky:

According to the Next Gen Stats era, Jefferson completed nine catches with below a 50% probability rate, which is more than any receiver has recorded since the records started.

The AFC offensive player of the week award went to Jonathan Taylor, who made his return for the Indianapolis Colts after being kept on the sideline with an ankle injury so far this season.

Taylor was certainly not rusty when returning to action on Sunday and he saw plenty of the ball with 22 carries throughout Indianapolis’ 25-20 win over the Raiders.

The running back rushed for 147 yards on his return as well as scoring a touchdown to earn himself the offensive player of the week award for the AFC, in a convincing performance on his return to the field.

There was only ever going to be one winner of the NFC Defensive player of the week, as Devin White managed nine tackles, two sacks, a forced fumble and a fumble recovery all in a Tampa Bay victory over the Seahawks.

The Steelers arguably only beat the New Orleans Saints on Sunday due to the hard work of linebacker Alex Highsmith who posted five tackles, two sacks, a tackle for loss and a forced fumble in Pittsburgh’s 20-10 win, which was enough to earn the 25-year old the AFC Defensive Player of the Week award.
Looking for some action on American Football? Check out the best NFL betting sites.
Join our Telegram channel to stay up to date on the latest in marketing