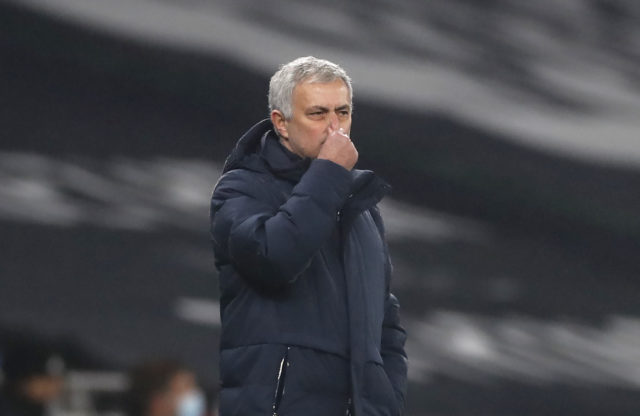 Tottenham Hotspur missed the chance to move into the top four after managing a 1-1 draw against London rivals Fulham in the Premier League clash on Wednesday night.

Spurs took the lead in the first half through Harry Kane. However, a late header from Ivan Cavaleiro secured a vital point for the Premier League strugglers.

Spurs boss Jose Mourinho admitted after the game that they are making the same mistakes since the beginning of the season.

His team created some very good opportunities in both the halves, but they failed to take their chances. Fulham attempted 15 shots during the game and got a deserved equaliser.

Mourinho said, as quoted by Football London: “This is the same story basically since the beginning of the season. We can talk about not killing the game yes, we can speak about that, and today was a clear situation where we could and should have killed the game in the first half but then you go back to the goals that we concede and it’s not also easy to assimilate that.”

Many Spurs fans have taken to Twitter to express their reactions after hearing Mourinho’s comment, and they are not impressed. Here are some of the selected tweets:

He’s not good enough, tactics are out of date and not in any way a fit for our football club, I don’t care if we win a cup, at what cost does that come.

Very simple – Continue playing until you kill the game off. Don’t just stop after the first half then blame players for missing chances. Keep going! It would be different if we attacked all game and missed chances.

Poor José, watching it play out over and over, with only his fabulous wages as compensation. If only the club could employ someone to identify problems in the way the team plays, and instruct the players on how to do things differently, to avoid repeating the same mistakes.

Surely he’s got to recognise that whatever his approach is, isn’t working then? I’m baffled at how a manager with his experience can sit there post countless examples where we’ve sat deep and defended a 1 nil lead, and tell us that the players just aren’t following instructions

Spurs have done well under Mourinho but their style of football has been far from impressive and exciting.

Mourinho has a wealth of attacking talents and yet Spurs hardly play an expansive brand of football. They try to remain solid at the back, and hit the opponent on the counter, with Kane and Son Heung-Min proving to be one of the best-attacking partnerships in world football at the moment.

However, Spurs fans want to see their team playing a more expressive brand of football, especially against weaker oppositions.