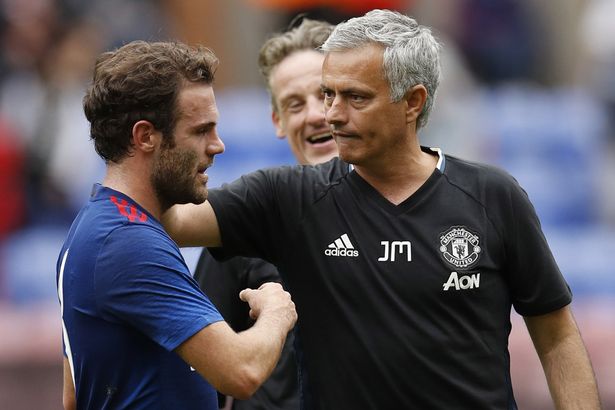 Eleven Premier League games into José Mourinho’s reign as Manchester United’s manager, and it is clear that the Portuguese trainer has a big job on his hands. Since the start of the 2016-17 season, the former Chelsea boss has recorded a number of successes. At times, it has felt that the personnel for potential success is present at Old Trafford.

However, inconsistency in performances and results showcase that the Red Devils are currently trailing a number of their Premier League rivals in the search for major silverware, with the likes of Liverpool, Chelsea, and Arsenal looking much-more rounded than Mourinho’s unit.

Although United have issues to solve in their defence, the dynamic of the side’s attack is fascinating and needs to be remedied. There are no shortage of top-notch, international-quality players at Mourinho’s disposal. However, he is yet to find a dynamic to have the Manchester club firing on all cylinders.

In United’s 4-2-3-1 formation, the wide positions remain occupied by players that look out of place, despite their quality, and one of the team’s current frailties is its lack of out-and-out width. Mourinho has largely selected from Juan Mata, Anthony Martial, Marcus Rashford, Henrikh Mkhitaryan and Ashley Young on the flanks so far this season. Of this gifted quintet, only Young and Lingard are wingers in the old sense of the word, with the other three preferring to play centrally in either an attacking midfield or striker’s role.

Mata is a sublimely gifted footballer, but deploying him wide nullifies his influence and sees the Spaniard encroach in-field to get involved. Both Rashford and Martial have the physical qualities to feature on the flanks, but their inexperience has prevented them from thriving in traditional wing play.

Mkhitaryan’s summer signature evoked excitement in the Old Trafford faithful, and as such the Armenian’s fringe status so far has had many scratching their heads. More worryingly, when the former Borussia Dortmund man has been given a chance to play it has been in a wide role. As such, it feels like United are seemingly making the same mistake as they did with Shinji Kagawa by playing a number ten on the flank.

As such, Mourinho needs to stopping trying to fit square pegs in round holes and deploy his players in their most-natural roles — or, at the very least ensure that the players on the flanks offer width. United’s attack has been one-dimensional and crowded centrally at times this season, and keeping wingers on the touchlines is the answer to solve this problem.

Although there is talk of Mourinho dipping into the transfer market to buy a central defender in January, reports linking the Red Devils with wingers like Yannick Carrasco and Bruma in recent days seem appropriate. Sir Alex Ferguson’s vastly successful United teams boasted imperious wing play, with top-class protagonists, such as Ryan Giggs and Cristiano Ronaldo, starring on the flanks.

The current squad lacks a specialist winger of the highest standard, and, as such, too many creative players that want to play centrally are spoiling the broth.

Gareth McKnight is the editor of Ninety Minutes Online