Only a victory would guarantee Liverpool fifth place and automatic qualification into next season’s UEFA Europa League, otherwise they will be relying on both Tottenham Hotspur and Southampton to drop points.

Stoke City already have ninth place confirmed for a second consecutive season and are finishing the season on a high with just one defeat in their last six heading into the final day of the season. The Potters have lost only one of their last six at the Britannia Stadium, winning four and keeping three clean sheets.

Liverpool are winless in their last four away games, losing two and scoring just twice. Three of these games were against bottom half sides.

Former-Liverpool forward Victor Moses hasn’t played much football of late due to a hamstring injury and the Nigerian international will not return on Sunday either.

Bojan’s serious knee injury has kept him out since the end of January.

Mamadou Sakho is back in training following a hamstring injury that has kept him out for the past six Premier League matches. He may not win his fitness battle to play in the final game of the 2014-15 season either. Jon Flanagan is also sidelined as he has been for virtually all of the season.

Daniel Sturridge’s hip operation is expected to keep him out until September. 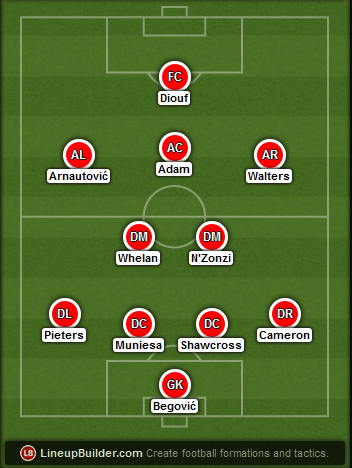 Mark Hughes plays the 4-2-3-1 formation with the two wide men creating most of the chances. Erik Pieters offers support from left full-back putting in crosses. Charlie Adam takes a lot of shots from his number 10 role but Stoke generally look to set up Mame Biram Diouf. 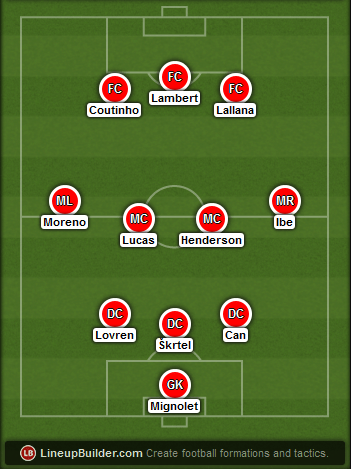 Liverpool were unsuccessful with their 3-4-3 formation last weekend but we’re predicting Brendan Rodgers finishes the season with it. Dejan Lovren played the left centre-back role in defeat to Crystal Palace last weekend where Jason Puncheon and Wilfried Zaha caused a lot of problems. Jordon Ibe’s defensive abilities as the right wingback are certainly questionable and it will be interesting to see if Raheem Sterling plays after he declared during the week that he won’t be renewing his contract at Anfield.

Jonathan Walters vs Dejan Lovren
Liverpool’s big summer signing struggled against the pace of Crystal Palace’s wide men last weekend but at least Jonathan Walters isn’t quick. However, the Stoke City man is hardworking, gets amongst the goals and will be looking to draw fouls from the Croatian. Alberto Moreno doesn’t always offer the best support from wingback either so this could prove a good matchup for the hosts, with Geoff Cameron supporting from full-back. He has scored in his last three home meetings versus Liverpool.

Mame Biram Diouf vs Martin Škrtel
Liverpool haven’t kept a clean sheet in their last four games and shipped three in their final home game, to Crystal Palace last weekend. The pace of Mame Biram Diouf should cause the back three problems – similar to as they suffered a week ago. The former Manchester United striker will be looking to hit them on the counter attack as well as getting on the end of crosses into the box.

Philippe Coutinho vs Geoff Cameron
Liverpool’s Brazilian playmaker has been one of their best players this season and will be looking to go out on a high. Philippe Coutinho may have difficulty finding freedom in this match with Jonathan Walters dropping back and probably marking him around midfield when the Liverpool player looks to collect the ball from deep. He’ll have Geoff Cameron and Ryan Shawcross to face when he cuts inside around the penalty area but if there’s one player in this side who can unlock defences and create chances from nothing, it’s Coutinho.

2 – Peter Crouch has scored only two goals in 15 Premier League matches against his former side.

8 – Steven Gerrard is Liverpool’s top scorer this season with eight goals. The lowest the Reds’ top scorer has ever been during a single Premier League season was Milan Baroš with nine during the 2004-05 season.

51 – Stoke City have collected a club record number of points this season heading into the final game.