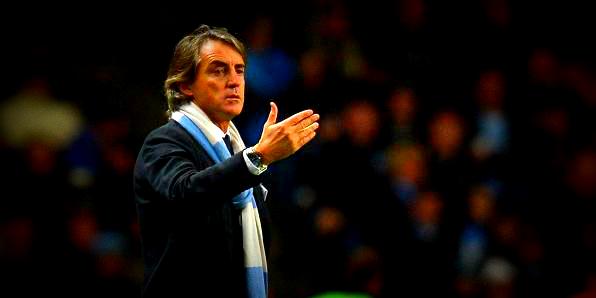 Manchester City manager Roberto Mancini has insisted that his critics who are claiming his job at the club is under threat don’t understand football.

Rivals Manchester United have extended a whacking gap of 12 points with them at the top of the Premier League table after City suffered a humiliating 3-1 defeat at the hands of Southampton in their last match and the pressure is steadily mounting on the Italian’s shoulder.

Former City player Danny Mills gave his opinion, saying Mancini could be sacked if they don’t beat Leeds United in the FA Cup this weekend. He told BBC Sport:

“Mancini is under pressure. It looks like they have blown their chances of retaining the title. You wonder what would happen if they went out of the FA Cup against Leeds. I think Roberto Mancini goes.”

However, the former Inter boss was seen in a jovial mood and when asked about his reaction of the criticism made by many former City players, he responded sarcastically, saying they were probably the players that won a lot of trophies in the history of the club. Mancini was quoted in the press:

“We started our project three years ago. In three years we are always on the top – we fight for the title, we have won three trophies, we have the chance to win more this year.

All the people who talk about this don’t understand football.”

Mancini further added that if his job is under the scanner then probably other 20 teams in the league would be without any manager.

Having bowed out of Champions League and League Cup early, FA Cup represents their last credible chance of lifting any silverware this season. City lifted the trophy in 2011 under Roberto Mancini, ending the 35-years drought.

For the upcoming fixture, skipper Vincent Kompany who has missed the last three games with a calf injury won’t be risked again while Gareth Barry is also expected to miss the tie. Central defender Matija Nastasic returns after a knee problem and striker Carlos Tevez will be available for selection too.