For the fourth time in as many Premier League games for Louis van Gaal his Manchester United side are odds-on favourites at the start of their next league game.

The Dutch manager has only picked up two points from his first three games but few are ruling the Red Devils out of finishing in the top four this season after their summer transfers.

Radamel Falcao, Daley Blind, Marcos Rojo and Luke Shaw are all available to make their Manchester United debut when they host Queens Park Rangers on Sunday.

United look very unbalanced and questions have been asked how van Gaal is going to get all of his attacking lineup into the team. A clearer picture will be painted ahead of kick off at Old Trafford this weekend.

Queens Park Rangers picked up their first points of the season at the end of August with a 1-0 win at home to Sunderland. The result puts Harry Redknapp’s side ahead of their opponents ahead of this weekend’s game.

The London side have scored only one goal to start the new season and conceded five. The sale of Loïc Rémy to Chelsea before the close of the transfer window certainly weakens Rangers on paper.

Defensively QPR did not look comfortable playing three at the back, much like their opponents in their first three games. Their 4-5-1 was much more successful versus Sunderland before the break.

The international break has been a blessing for Louis van Gaal who has seen Marcos Rojo obtain his work permit and Ander Herrera, Luke Shaw and Rafael all return from injury. It’s all given both Robin van Persie and Radamel Falcao to get sharper after both looked far short of being match fit prior to the break.

As well as Falcao coming on loan after their 0-0 draw with Burnley, Daley Blind has been signed and is available for selection this weekend.

Marouane Fellaini, Michael Carrick and Jesse Lingard are all out.

Alejandro Faurlin is a long-term injury for Queens Park Rangers but otherwise Harry Redknapp has the rest of his squad to choose from.

Eduardo Vargas and Sandro could make their debuts after signing at the end of the transfer window. 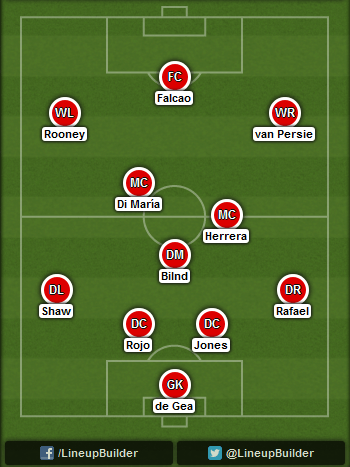 Louis van Gaal said he was playing the 3-4-1-2 formation because it was the best formation for the players he had available. Following a number of transfers and players recovering from injury there are certainly better formations available to the Dutch manager now. We’re predicting to see Manchester United lineup in the 4-3-3 formation.

This includes a new left side of defence with both Luke Shaw and Marcos Rojo starting. Not expecting Ángel Di María and Juan Mata to both start with their lack of defensive efforts. Radamel Falcao only plays one position whilst Robin van Persie and Wayne Rooney both have experience out wide. 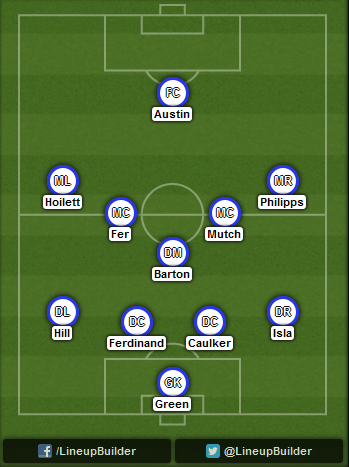 Queens Park Rangers can protect the centre of the pitch and Rio Ferdinand with a central trio. They have pace down the wings to cause a threat of their own, perhaps on the counter attack. But Redknapp’s side face a tough task against this Manchester United attack even if the Red Devils have created little in their opening three games.

Robin van Persie vs Clint Hill
Wasn’t a fan of Clint Hill when Queens Park Rangers were in the Premier League two seasons ago. Still not a fan of him now. Ángel Di María may be the ideal player to stick down the right wing to match up against the ageing defender but even if Robin van Persie does you’d expect the Dutchman to have a great game.

Radamel Falcao vs Rio Ferdinand
Should Louis van Gaal name the new signings in the starting lineup then he could go up against the experienced Rio Ferdinand. Whilst some Queens Park Rangers may favour this match up due to the experience difference, Falcao has scored wherever he has played and you’d think he could get the better in this matchup.

Ángel Di María vs Joey Barton
A lot is expected to the British record transfer signing and he could be welcomed to the Premier League by Joey Barton in the centre of midfield. The Argentine had a quiet debut versus Burnley in the centre of midfield. He’s capable of tearing any defence apart. I’m not a fan of Barton but expect the midfielder to try wind up his opponent and put him off his game with a few naughty challenges.

Prediction: Manchester United 2-0 Queens Park Rangers
Manchester United have not clicked in attack yet and there could be a number of players making their debut this weekend. However, on paper they certainly look capable of putting a few past the newly-promoted side. Louis van Gaal’s side looked much better defensively against Burnley and we’re predicting they’ll produce a solid 2-0 win.